So, spice lovers, today it’s time for another recipe. Or, well, strictly speaking, it isn’t. My recipe of the month typically goes up on the last weekend and there’s still one more to go this january. But hey, I’m sure that none of you will mind getting something a week early.

Today, I intend to show you a birthday cake. One carefully crafted to please an online friend, who I met up with in person for the first time yesterday. And I would have kept that cake between the two of us, if it weren’t for one minor detail: This friend requested chilli.

Why? I’m not sure. I think, perhaps, that they just assumed that it would feature in anything I made but, whatever the reason, I decided to play it safe. I knew nothing of her spice tolerance and she wasn’t the member of the group who was super into hot stuff.

In fact, I knew very little of her food tastes in general. All I had to go on was that she liked things rich and jokingly identified as a moose but, fortunately, that was enough for me to have an idea.

I would make a chocolate mousse cake, at least partially for the bad pun, using some of the mildest, richest peppers that I knew of – The mexican ancho and pasilla. And I’ll show you how I did it, right after that “Continue reading” button.

For the ingredients, you will need:

For the mousse itself:

And for the cake:

Which means that we’re going to have to separate some eggs. The easiest way to do that, so far as I am aware, is to crack them carefully and gently move the yolk back and forth between the halves of shell. Simply do so over a bowl to catch the egg white and be careful not to pop the yolk on any sharp edges.

When you’re done, deposit the yolks into a second bowl and viola! 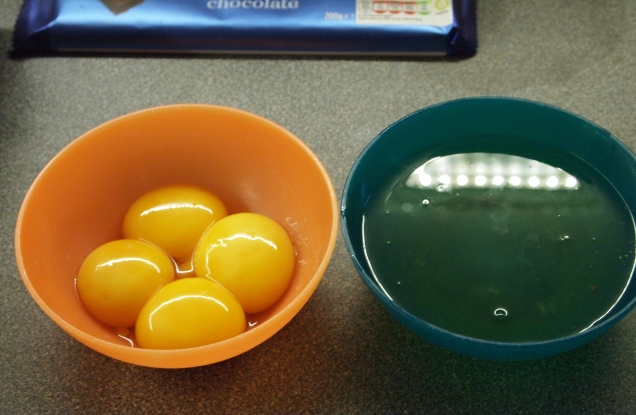 Now beat those yolks fluffy and whisk in the sugar. Along with the vanilla and syrup. The syrup being more to compliment the chilli in the cake than for any minimal heat that it might provide.

All this whisking should take less than five minutes with an electric whisk but will probably take far longer without. Given the nature of this recipe, and how I managed to friction burn my hand last time I attempted something similar, I would strongly recommend against continuing manually.

Moving on, though, it’s time to heat half of the cream. Do so over a medium flame, so as to keep from boiling it, and stir regularly so that it doesn’t stick to the sides.

Upon reaching a light simmer, turn the heat right down and whisk half of the heated cream (now a little less than 150ml) into the beaten yolk mix, before stirring the results back into the pan. This keeps us from cooking the egg right away and curdling everything.

We will, however, want to continue to stir and to heat the mixture on that low flame, for about five minutes, in order to thicken it up.

As it does so, break in the chocolate and ensure that it melts. Then, once the colour is even, remove your pan from the heat, allow it to cool and refrigerate it with the remaining 300ml of cream while you make the body of the cake.

Once again, this begins with the beating of the eggs, along with the salt, cornflour and two tablespoons of sugar, this time until they become a nice, white foam.

Then, set that aside to mix all of your dry ingredients (including the remaining sugar) and rub the butter, tiny chunk by tiny chunk, into the resulting floury blend by hand. This should eventually reach a fine, crumb-like consistency.

When it has done, fold the dry mixture into the wet, along with six tablespoons of water, to produce a batter with the consistency of moist cookie dough.

Bake in two greased and lined cake tins, preferably a little less wide than mine, for half an hour at 180°C. and you’ll get something a like this:

Meaning that all we need to do now is ice it.

To finish off the mousse that you’ll be using for icing, grab another bowl and whisk the remaining cream until it has just turned solid. No more, no less.

Then fold that into your chilled chocolate and cream mix and it’s good to go.

Smooth it over both halves at sandwich your cake together for a truly delicious, rich and chocolatey masterpiece.

Its icing silky smooth, its aroma dark, rich and mexican and its body predominantly cocoa but with wonderfully spiced undertones and a very mild

If I wasn’t actively aiming for mild, that lack of bite might have been a little disappointing, but every single other element of this cake knocked it out of the park.

It was divine. And it was all from ordinary ingredients that should feature in every chilli lover’s store cupboard.

Plus, it gave me an excuse to try out my new camera, though good lighting is still a work in progress for the time being.