Good general holiday season, everyone. I hope you’ve been enjoying it and that the coming turn of the year treats you well.

I’ll be making a vaguely themed review post then (and it’s going to be a goodie!) but, in the mean time, here’s a simple recipe to tide you over.

Not one for christmas food, per se, since I gave you that last month but one for some nice, warming, earthy gingerbread – A seasonal special all the same.

Now, before I begin, this recipe uses ghost pepper. It’s a rather hot one. Yet, despite the chilli’s reputation, it’s not a super hot one. Largely because I’m keeping the quantity small.

Unlike in most of my recipes, I don’t particularly want to taste the pepper in my gingerbread. That’s not what it’s about but it’s not here for the intensity, either.

What I’m using the ghost for is its long, slow-growing, dry heat, which really compliments the rootier, throatier fire from the ginger and all of the earthy spices that this treat typically contains. It’s about the way that these sensations go together, not their strength, and it’s the taste of those spices that I want to highlight, not that of today’s chilli.

It is unusual for me but, as I’ve mentioned in the past, I’m as much of a spice lover as I am a chilli one. And, contrary to what companies will tell you, it’s never all about the flavour.

Not everyone who likes heat wants to push themselves but no-one builds a life around peppers without enjoying the sensation at least a little.

In this particular dish, that sensation is gradual. There’s no sudden kick and the first bite is little more that a well-spiced biscuit but it builds. Starting as a warming ginger, the ghost subtly ramps up underneath until the cookie’s

is pushing at the upper limit of that number.

It is, if I’m honest, going to be too much for the average person but, if you’re the sort that orders “hot” in a restaurant, you’ll get a lot of enjoyment out of these. Just let the first couple peak before you go in for a handful.

And, if you’re not, feel free to cut down the pepper quantity. I just don’t think I could reliably measure any less myself.

Here’s what I used:

And a pair of disposable gloves, since you’re going to be getting a little touchy feely with this recipe and, small as it might be, no amount of ghost pepper is a good amount to have stuck on your fingers.

So, with all that warning out the way, let’s actually make a start on today’s recipe.

To begin, sieve your flour, cinnamon, ginger and ghost pepper into a large mixing bowl, stirring them all together as you go. Then, ensure that the butter is room temperature or this next part is going to be a little tough.

You’re going to want to chop it up as finely as you can when you’re adding it to the bowl, since it’s time to get your hands (or at least the gloves on them) dirty by rubbing the butter into the dry ingredients. And you’re going to have to keep going until everything is a fine, crumb-like consistency if you want your gingerbread to end up smooth and even.

When that’s done, crack your egg into a smaller bowl and add the syrup gradually, beating in each spoonful before adding the next one.

Combine the contents of both bowls and mix thoroughly, adding the sugar as you go. Then kneed the resulting batter to a smooth, slightly shiny ball of spiced goodness.

Depending on the exact size of your egg, you may need to add a drop of water to do so but make sure to use less than you think you need. A little goes a long way and the last thing we want is for the batter to get sticky and us to have to add extra flour.

Once it looks and feels right all over and isn’t attempting to crumble, wrap it in cling film (or seran wrap for my american audience) and shove it in the fridge for at least half an hour.

I went over why we do this in an earlier recipe but the gist of it is simple: The colder the cookie, the slower the butter will melt and the more cooked our biscuit batter will be by then. This helps keep what we make from spreading out on the baking tray and allows us to brown the edges while still keeping it soft.

But I’m getting ahead of myself. Before we bake anything, we need to roll the dough out on a clean and lightly floured tabletop, to a thickness of roughly half a centimetre, and cut out our little human shapes.

Combine the offcuts and gently kneed them back into a ball to repeat the process and you can fill two standard sized baking trays. Just line them with baking paper first or the biscuits will be a real pain to scrape off.

Once your trays are full, pop them in the oven a bake until the edges of your gingerbread guys are turning brown and they spring back into shape when poked. This took twelve minutes for mine and doesn’t actually mean that the biscuits are done but here’s the secret: They don’t have to be.

For the most delightfully soft cookies, you want them just cooked when you eat them, not when you remove them from the oven. And there is actually a difference between the two, since they will cook just a tiny bit more from their own residual heat as they cool.

That last little bit of cooking gives you the perfect flexible biscuit texture when they hit the “warm but edible” stage in just a few minutes.

They’re still great cold but, as with most baked good, nothing beats the deliciousness of how they taste shortly after they come out. 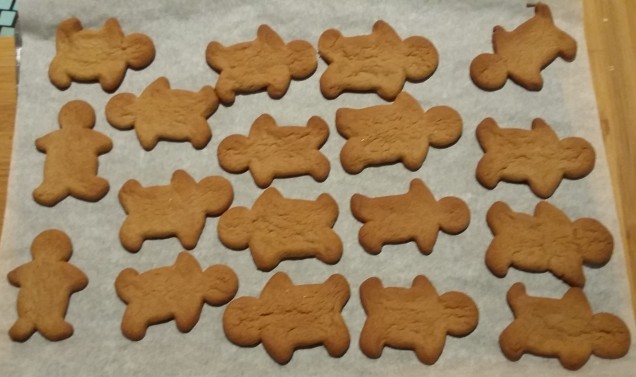