Welcome to december, everyone – The real month of christmas content but also the last week of it on my blog, since there’s no point in me making recommendations if I can’t be sure that they’ll reach you in time.

Today is definitely a seasonal review, though, and it marks the return of Holly and the Ivy, who you’ve seen before under their other name as The Mini Jar Company. Before I try out their little freebie, though, I want to give you a bit of backstory.

I dislike brussel sprouts. I don’t find them bitter so, just as with coriander, I’m not genetically inclined to hate them. I just do. The same way that many kids apparently hate broccoli.

After all, all it takes sometimes is a single bad experience to put you off a food for life. And let me tell you, getting your packed lunch wrecked by schoolyard bullies, only to have it replaced with an almost indeterminable green mush, is definitely a bad experience. A terrible introduction to the traditional veg of the season.

So it’s entirely possible that I’m going to hate today’s product through no fault of its own but, when Holly and the Ivy asked if I wanted to try their Red Onion, Sprout & Naga Chilli Chutney, I realised that I haven’t actually given the vegetable a fair shot in my adult life.

And, since 📽️ Mushemi Fire 📽️ and Cowley’s Fine Food have both proven that I can like even mushrooms if they’re prepared right, I said “yes”. I decided to give their christmas special a go. 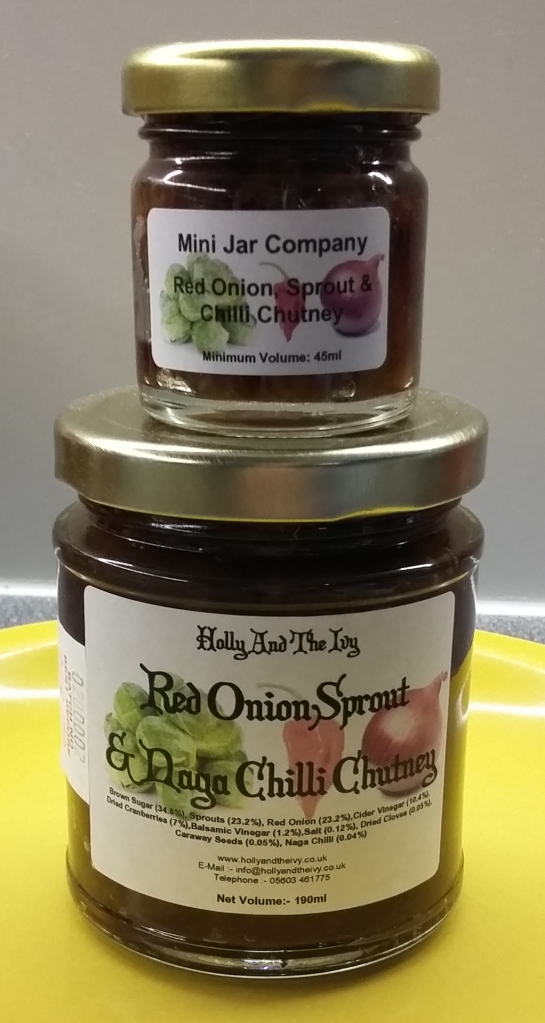 As you can see, I don’t have just the one jar this time, either. I have both the mini one – Perfect for stocking filling – and the full-sized, 190ml version.

Yet there’s very little difference in their labels. All that’s changed for the bigger size is the company name, the font and the fact that the ingredients are written on the front.

Ingredients that were previously on the back but, as before, are largely pictured in the middle of their white label, anyway.

It’s not exactly the most exciting of images but it tells you all that you need to know – That this product contains brussel sprouts, onions and some superhot chilli.

And so, with all that out of the way, I guess it’s time that I grabbed a spoon.

Even before I do so, though, just cracking the lid on this one unleashes a strong waft of rich, browned and sweetened onions with subtle vinegar notes and a something more savoury that I don’t quite recognise. Presumably the sprouts.

Once it’s out of the jar, however, we can get a much better idea of what it’s going to be like:

Long shreds of limp, caramelised onion, made darker still by the sticky brown sugar and balsamic vinegar that it was cooked in, interwoven with surprisingly similar, yet more opaque, dark-green veg.

To the unobservant, today’s item could just be an onion relish but its taste says otherwise.

The larger chunks of sprout are recognisable in both flavour and texture, despite not being the inedible mush that I remember, and they add a dash of green and savoury to offset the rich and sweet. An aspect that would go great with burgers, perhaps. But that’s not all.

There’s also a fair bit of fruitiness in the background, stemming from the addition cranberries and, perhaps, the naga itself. A chilli that give a slow and throaty, yet also somewhat tongue tingling, high

One that just about exceeds the hottest orange and red habanero sauces that I’ve had but still can’t quite match Wiltshire Chilli Farm’s Dark Habanero.

It’s a good level for a chilli lover and a really nice kind of burn to warm you up in winter but you might want to go a tad easy on it if you’ve never had anything with superhots in before.

For me, though, I can happily go whole hog with it in a cheese sandwich ’cause I can take the heat and I’m genuinely loving this product. Despite its christmasy choice of vegetable.

Because, no, I don’t think that this has changed my mind on sprouts. The odd mouthfuls that are mostly them are the worst part of Holly and the Ivy’s chutney but the veg still has its place in the overall taste and, to be entirely fair to them, the worst part of a terrific chutney is still far from bad.

So yes, I’d recommend this Red Onion, Sprout & Naga Chilli Chutney wholeheartedly, even if you don’t like brussel sprouts. It’s a wonderful way to actually enjoy an otherwise unpalatable taste of the season and the cranberries and ever-so-subtle hint of cloves only adds to the experience.

As long as you can appreciate hot food and don’t dislike the main vegetable on a genetic level, I reckon you’ll love it as much as I do.

But there is one slight quirk that I’d like to address before I go: The “chutney” element. Why do Holly and the Ivy call their product a chutney when the closest other thing to it is onion relish?

Well, as it turns out, there is a minor difference. While both contain vegetables, vinegar and sugar and both often contain fruit, a chutney actually has to include fruit to be a chutney. A relish can get away with just veg.

If it weren’t for the cranberries, therefore, this “chutney” would have to be a relish but, as is, the company can call it whichever they wish.

And, with that said, this review is done. I’ll leave you here with the ingredients list and then get to work on this thursday’s christmas recap. See you soon.

One thought on “Seasonal Chutney”