Hey folks. Having branched out to a second hot sauce importer fairly recently, I feel obliged to follow up on that post with a few more. To really show the full spectrum of suppliers.

Today, I’m just looking at one such company. One that brings over delicious sauces from germany and one that’s already quite close to my heart.

Today, I’m looking at Grim Reaper Foods but I’m looking at what they import, not what they make, for a change. Just be aware that the company that they stock is another slightly sweary one before you click through to read this article in full. 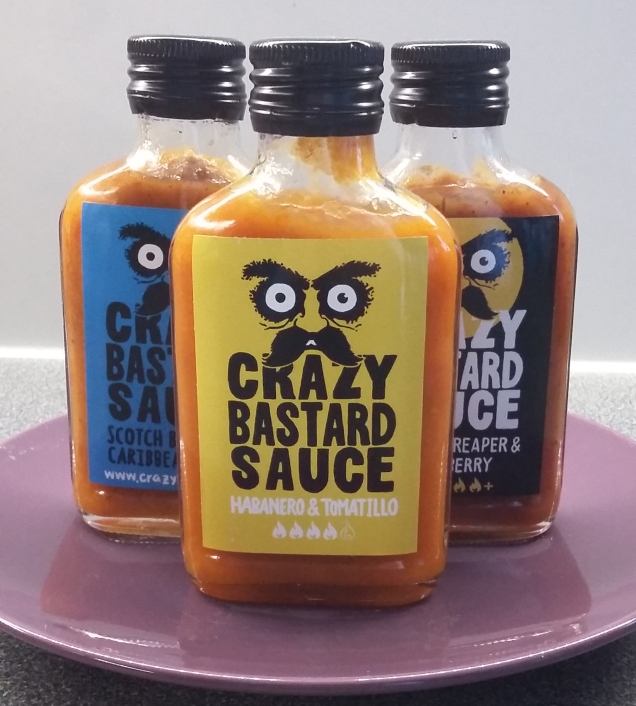 These are just three of the Crazy Bastard Hot Sauce range, a six sauce line-up from a small but award winning company in berlin. A small line from which Grim Reaper Foods only stocked four sauces when I placed my order.

Yet, since then, they’ve decided to carry Crazy Bastard’s entire main range and more, even picking up both of their current limited editions.

If this review goes up in time, I’d like to strongly recommend the Ghost Pepper & Mango to anyone who loves the taste of fresh, orange habaneros like I do. It’s a bit light on the ghost pepper flavour but its fresh, sweetish blend of orange bells and mango more than makes up for it.

As for today’s actual review items, though, let’s start with the mildest and thickest:

It’s their blue label and the second weakest of the range overall, rated at a mere two flames out of five. Not that they actually display the rating on the label for this one.

No, the black text below the company name takes up too much space here, having to use two full lines to state the flavour. Without changing the rest of their branding – Their name in bold, overlapped by the bushy moustache of a grump old man’s face – there simply isn’t room for the heat.

It’s an ok design but it’s nothing too exciting and I feel like this sauce gets by on its brand name and popular pepper, from a marketing standpoint.

Question is, though, does their blend of “scotch bonnet & caribbean spices” pull its weight in flavour? Russell, the guy behind Grim Reaper Foods, seems to think so. This was the one that he recommended and, after everything else that he’s given me, I’m inclined to believe him. But I’m still going to find out for myself:

It pours easily and is neither too thick nor too thin but does have both watery and chunky components so could stand to be shaken up before use.

Its aroma is peppery and fruity but savoury, with a slight earthiness, and it almost comes across as tomato-based, despite containing none. There’s a touch of garlic to it but what interests me more is the green, planty, vegetable element that’s coming to the fore. The unmistakable smell of celery, used here instead of the thyme that you might find in a traditional jerk sauce.

Because this isn’t a jerk sauce. It’s a sauce with a jerk-style spice mix but it’s far more focussed on its peppers and shuns the barbecue side of jerk entirely.

Those peppers being both bells and a blend of chillies that balances out any sweetness from them – A particularly savoury and earthy mix of red scotch bonnets and fully ripe bird’s eyes.

When it hits my tongue, this sauce is not a sweet one at all, despite its heavy use of what are generally seen as sweet spices.

Nutmeg and cloves enhance the chillies’ own earthiness, whilst coriander leaf and ginger help marry the peppers’ more vegetable notes to the green ones of the celery.

It’s a slightly rich and fairly complex sauce but it is very much a scotch bonnet one, even if it is more bell pepper than anything else by volume and its low

on the high end of medium, has the sting of a hot annuum pepper because of its bird’s eye content.

This is definitely a great buy for scotch bonnet lovers as it’s not only delicious but also highly versatile, lending itself to use with chips, baked beans and bolognese just as easily as the lamb and chicken that its makers suggest.

And you know, with all its celery content, that this sauce is going to make one hell of a good bloody mary.

So, the first of today’s three sauces is a winner but what about the second? Their yellow label? 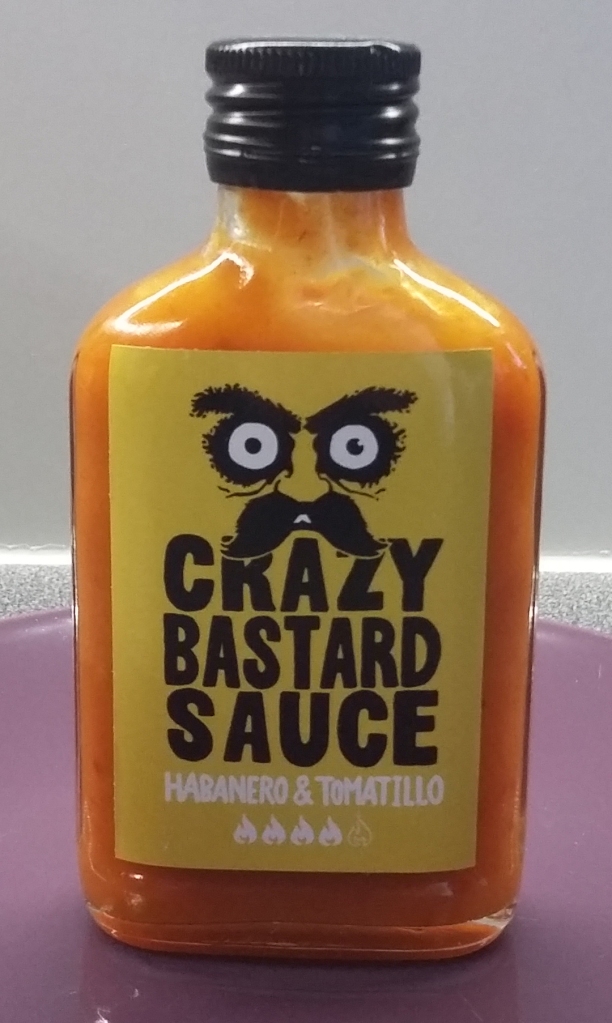 This one, being Habanero & Tomatillo, takes up a lot less space with its key flavours on the front, leaving room for a four flame heat rating in white at the bottom of the bottle.

Yet, aside from that, there’s not much difference. It’s simply yellow instead of blue, with the same black company name and logo. But it’s flavour excites me rather more at a glance.

While Crazy Bastard’s take on it is something special, their blue sauce was a common, popular flavour pairing that I’ve had time and again.

Habanero & Tomatillo, however, is entirely new to me. I’ve had the two ingredients separately, of course, but I’ve only ever seen tomatilloes paired with green peppers in the past.

Let’s give this novel combination a go. 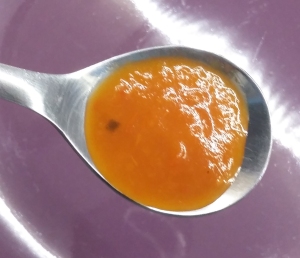 In stark contrast to the previous sauce, this one is super smooth, even with its few seeds and shreds of red. And its aroma is light and subtle. Almost apple-like in its gentle fruitiness, or perhaps grapey like its white wine vinegar.

This is not the bold, savoury condiment that its milder counterpart was. This is gentle take on an orange habanero sauce with all the natural sweetness that that entails and a delightfully smooth, not quite creamy texture from its mexican not quite tomatoes.

It’s another tasty one, with its lime and vinegar adding a little tanginess to finish and its hint of apple contributing to its smoothness of flavour, as well as texture. The only thing I’m not so sure on here is its equally smooth bitterness.

A bitterness that resembles the sourness of the reaper or a “dry” set of spices. One that I can’t seem to place the origin of.

Yet its a bitterness that vanishes into a meal, perhaps preventing this sauce’s use on chips or as a standalone dipping sauce but not even remotely hurting its use on cheese, tomato and seafood dishes.

In particular, I really enjoy this sauce on tuna and have even gone out of my way to get the fish on pizza to eat it with.

Or, if you’re feeling a little more adventurous, its makers suggest it on tacos and I think it’d also work wonderfully as a replacement for the tomato in a prawn cocktail or marie rose.

I wasn’t so sure when I first tasted it but, after a little use on food, I definitely think this is my favourite of today’s three sauces. The texture and flavour both contribute so much to a meal and its high

that falls just shy of a four is a great level for everyday use. Hot but not quite what I’d call “extra hot” and a long way from pushing my limits.

If you enjoy habanero sauces already, this is towards the top end of those and an item that I’d thoroughly recommend.

Now, onto the third one. Their five plus out of five. Their world record chilli concoction. Their Carolina Reaper & Blueberry black label. 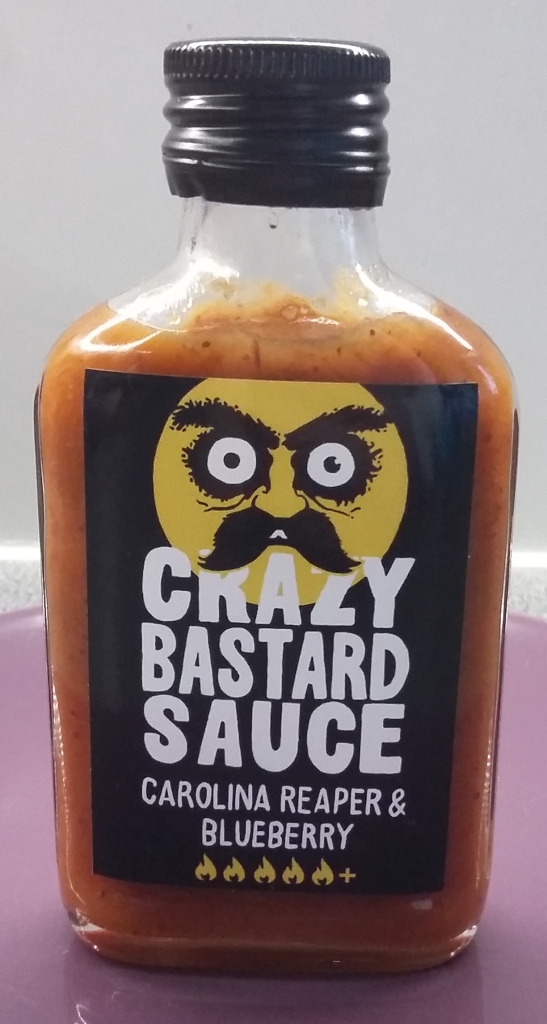 The most visually different of their main line, with its text all in white and the bushy, man-face logo encased in a circle of the same yellow as the second bottle. Yellow flames just about squeezing in beneath the three word description of its flavour.

This one’s pretty striking but it’s the darker contents, not the label, that really get me intrigued.

It’s thicker and pulpier than the yellow label, yet smoother and less prone to separation than the blue. It’s not chunky but it certainly has texture to it. Just as it’s not the hottest but it is hotter than our last blueberry sauce. If only a little, at the bottom of my blog’s

Yet the higher amount of pepper in Crazy B’s black label makes a world of difference to its flavour. That previous item was a berry sauce with heat, while this ones more of a chilli sauce with fruit. Not the perfect balance of the two that I was hoping for but a pleasant berry undertone beneath its highly peppery, slightly earthy, somewhat mellow, carolina reaper body.

A taste that will add that slight bit of fruitiness I love to con carne and hold its own in a bold-flavoured burrito, without being too strong to pair with soft, tart cheeses like feta.

I feel as if I’ve had better reaper sauces and better blueberry sauces but this one is unique in doing both and, despite a slight tinge of that reaper sourness, I will definitely be bringing it out to liven my meals up from time to time.

It will not, however, be quite the go to that I found Crazy B’s others to be and, for that, it’s my least favourite of the range. Even if it is a fairly enjoyable product with a strong, quite stinging heat.

A decent sauce still seems a little underwhelming when tasted alongside great ones and the blue and yellow labels were, in my opinion, significantly better blends.

All in all, though, I’ve thoroughly enjoyed testing out today’s sauces and they seem to go a lot further than I first expected, given their small, portable, 100ml size.

I am happy to recommend the company and, by extension, their importer. Not that you haven’t already heard how much I love Grim Reaper Foods.

And so, with that, I’ve said everything I want to for this week’s review. I’ll just leave you with these – Their ingredients lists:

And the black was made with:

Oh and they’re all labelled as vegan, which came as quite a surprise to me. Not because I thought that they wouldn’t suit the diet (most hot sauce does) but because so few of the smaller companies over here bother to check.

The last people I would have expected to care about veganness are the meat-centric germans but here they go, subverting my expectations by taking others’ diets into consideration.

Crazy B seem like good people and they definitely make great sauce.