This month, I had plans for another anime-inspired recipe but I’m afraid that the ramen are going to have to wait. Because I came across something far fancier:

Saffron, one of the most expensive per weight spices around, going buy one get one free.

Today, I’m going to be working with that but don’t worry, my recipe requires only a pinch and, while it won’t taste the same without it, I do have a substitution to suggest should you really need one.

The ingredients, as I made it, were as follows: 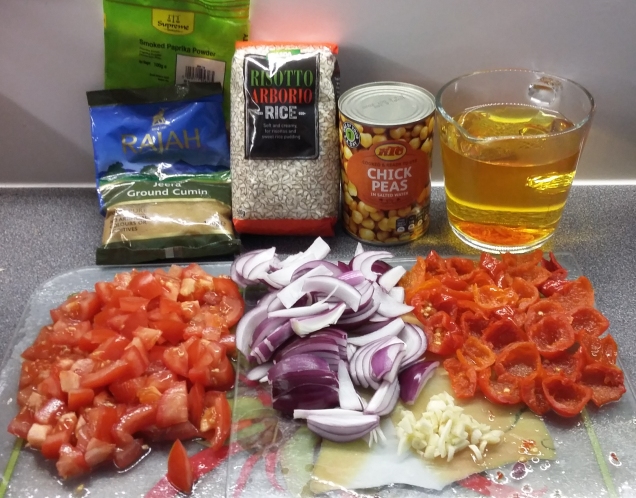 And yes, that’s a whopping sixteen chillies – The most that I’ve ever used in a recipe – but there’s a reason for that. They’re also the mildest.

In fact, between coming pre-cored and losing a little of their strength when cooked, even the little fire that they have was almost gone by the time I served my paella. If anything, I’d give the finished dish the bare minimum of what I can taste. A

that comes across more as a warmth in the throat than any actual burn and isn’t obvious until you’ve eaten most of a portion.

Today’s non-traditional, vegetarian and vegan take on a paella isn’t about the burn or even that warmth. It’s about showing off the flavours of a highly prized, delicate spice and some mild but delicious chillies that have a wonderful natural sweetness about them.

Because why else would I leave out the seafood?

Yet, while Peppadew brand malawi picanté are readily available in supermarkets, they’re not the only pickled chilli that will work here. If you want a bit more burn or simply can’t get hold of the same ones that I used for whatever reason, red jalapeños would make for a pretty good substitute. They do, after all, have a similar ripe red chilli fruitiness about them.

First things first, though, we need to make up some stock. Some very simple saffron stock.

All you have to do is boil 500ml of water, add that big, quarter spoonful, pinch of saffron and leave it to infuse.

You can replace this with veg or chicken stock if you want and you’ll still get a great dish but it won’t have the unique, rich yet delicate, slightly earthy and slightly floral flavour of the spice.

While that’s doing its thing, we’ve got a spare fifteen minutes or more so let’s get to chopping the veg.

Crush the garlic, dice the onions and tomato and halve the chillies. Unless, of course, you’ve substituted them for jalapeño rings but, in that case, you’re going to have to be extra careful with squeezing out the pickle juice. Jalapeños tend to come in a stronger, less sweet vinegar than the malawi picanté but both could use a little squeezing.

Once that’s done, though, give your chickpeas a quick rinse and everything should be good to go. It’s time we began frying!

Gently warm up some olive oil in a wide pan with a lid (we’ll use it later), keeping the heat on low. When it’s up to a good temperature, add the garlic and leave if for a minute or two until it’s sizzling.

Once it is, add your onions immediately and stir, seasoning with a couple of pinches of salt.

Let them cook until transparent, then add the chillies and (non-saffron) spices, frying them in for just a minute or two before the next ingredient. The tomatoes.

For these, make a well in the centre, where the pan is hottest, so that they cook and break apart quicker. We want them to form a part of the dish’s base, not leave chunks in the end result.

That said, though, they only need to soften a bit before we can bring the rest in from the sides and stir everything together. Any more disintegration should happen naturally as the whole lot continues to cook.

So, once everything’s one mass of veg oncemore, go ahead and add your drained chickpeas.

Fry them in with your veg for five minutes so that they pick up some of the flavour, then toss in the rice.

The rice also needs to fry for a few minutes, until the edges get a little transparent. Then it’s ready to absorb the stock.

Add half of that now and turn the heat up a little to bring everything to a simmer. At which point, you’ll need to put the lid on to retain the liquid. You will, however, need to briefly remove that lid every 5 minutes or so to bring in the rice from the sides and lift up any caught on the bottom to ensure that everything cooks at a decent rate.

And, once all of it has soaked in (which should take roughly 15-20 minutes), add the remaining stock and repeat that process.

Finally, garnish with chopped up chive, for a bit of contrast and bite, and serve: 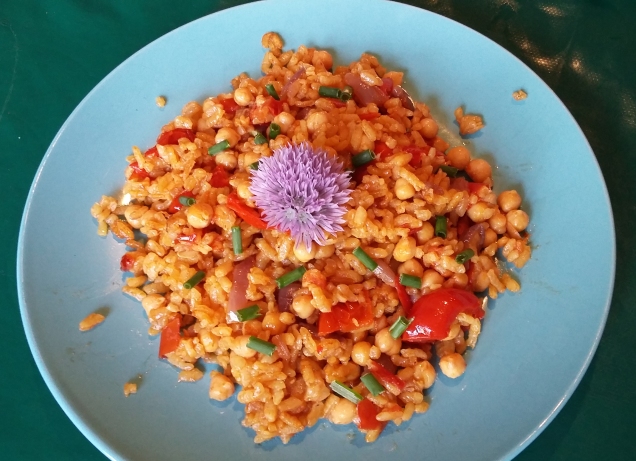 No, I’m not sure if the flower’s edible either but hey, it looks great and you don’t have to actually eat it. Just enjoy the rest of the dish with its mild warmth and almost self-contradictory, delicate richness.

I’ll be back with something entirely different next month.

One thought on “Chickpea & Peppadew Paella”