Alright, everyone, I’ve left a little too much time between these and will try to be a little quicker about uploading the next one but here we go with the third of my Mahi Fine Food reviews.

This time, though, it’s not your average sauce. It’s a dedicated rub and marinade.

The first such product to be featured on my site, in fact.

Its labelling closely resembles that of their Garlic Sauce, opting for a more traditional-feeling tan background over the bold colour we saw on the Red Jala. Yet what colour it does have is a tad more obvious than that on the first sauce.

The words beneath its “Peri Peri Hot” title tell us what type of product this is and they do so in a clear brick red. The same exact colour that forms the frames for its ingredients and blurb.

There’s no unsaturated version on this marinade but still, the company logo remains as uncoloured as ever.

Personally, I’m ok with that. It feels like a style choice at this point and it works with the rest of their design. I just have to wonder why they show a different version online.

Not even the proportions of the jar are the same on their site.

Yet this isn’t a complaint that has anything to do with the item itself.

The jar that Mahi gave me in looks good. Better, if anything. And the packaging nicely compliments the paler, creamier orange of the marinade inside.

Let’s get a better look at that:

It looks surprisingly similar to Flying Goose’s sriracha mayo in this still image, with both the same colour and the same small chunks that give it texture.

It isn’t a thick emulsion, though. It doesn’t have the texture of a mayonnaise, despite containing both oil and vinegar.

And, while it’s not terribly thin, it is on the thinner side. Something that the ingredients list explains rather well:

It’s unbearably vinegary when eaten from a spoon but that’s not how it’s meant to be used.

This marinade is meant for meat, where such acidity will help break apart long chains of proteins into smaller ones. That is to say, it’ll help to tenderise.

So let’s give it a go on something as it was intended.

You can see that it has fallen from the flesh, not clinging as well as something thicker might, but only a small amount was lost. The chunks still cooked up beautifully. 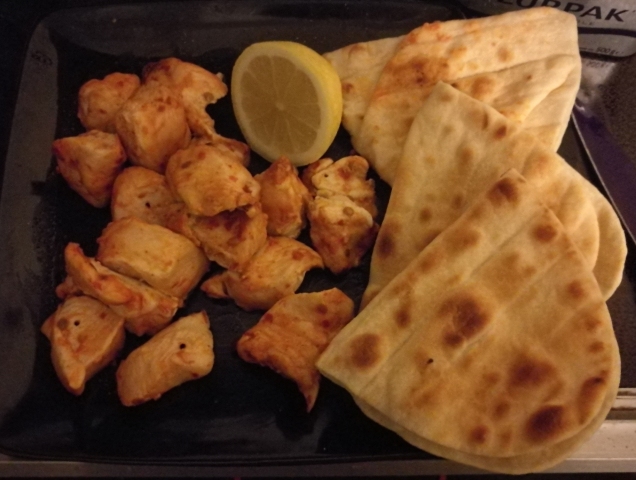 And, flavour-wise, it was more or less what I’d expect from peri peri – A lightly creamy coating with a good amount of red chilli flavour, no sweetness to speak of and a small but lingering hint of citrus.

There’s a tiny touch of bitterness from the peppers themselves and you can definitely taste that some have been dried but neither of those harms this product’s taste in any way.

The only issue I have with it is that it’s still quite heavy on the spirit vinegar, albeit rather less overpoweringly so with the chicken there to keep it in check.

I’d say it does its job pretty well but calling this one “hot” feels a little generous to me.

On its own, this sauce is slap bang in the middle of my

but nothing with it on is going to be as hot as the sauce itself.

Used as intended, it becomes a marinade that’ll give chicken a high

and, since no one’s actually going to use this item as a pour-on, I’m going to have to make that the rating I use for my sidebar.

A decidedly medium kick to the back of the mouth and throat that I find satisfying, even if it is a bit below advertised.

Like with their last product, I’d be very happy to find something like this in a supermarket and, while I might use a little more next time to combat the cheese’s poor absorbency, I found indian paneer a great vegetarian alternative to meat that paired well with its high vinegar content.

Just imagine half a dozen of these in a nice, fresh wrap:

2 thoughts on “My First Marinade”