Hey everyone, it’s time we took another look at Thousand Hills and this time I’m sampling two sauces.

Up first, their Sriracha.

Or at least, that’s what their website calls it. Their bottle tells a different story.

According to the bold, white, block capitals that adorn their green label, this is a “Serenade & Garlic Chilli Sauce”. Serenade being a similar chilli to the red jalapeño and the one shown beneath this text.

The only other thing of note here is the white company logo, where the cross of the T forms a hill shaped line over the text. It’s a very simple bottle design but the light green stands out against the deep red of the sauce and, with the tiny “medium heat” text included in their logo, it tells us everything we need to know about the contents.

So let’s crack it open, shall we? 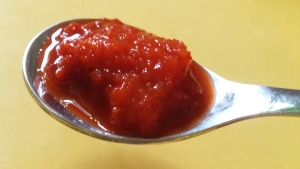 It’s thick, it’s chunky and it blobs out in pretty decent sized dollops. Its aroma has a clear cider vinegar element to it but also savoury notes.

Most of these come from the garlic but not all. While it is a little fruity like a red jalapeño and has a similar red chilli flavour, the serenade also has some of that savoury side you’d get from cooking tomatoes, taking the place of most of the jalapeño’s natural sweetness.

It was for this reason that I thought these chillies would pair beautifully with the garlic. It was that that prompted me to purchase it. And I wasn’t wrong.

The chillies and the garlic are perfect together but, somewhere along the way, the little sweetness that they did possess was lost and, with this sauce not being a sriracha after all, there’s no sugar in here to replace it.

What the “sriracha” does contain, however, is:

Giving it a savoury garlic and red pepper (both chilli and bell) base flavour that, instead of sugar, has a real tart zing to it from the vinegar and lime content.

A tartness that then gives way to some major bitterness, coming either from the chilli’s placenta or, more likely, the peel from those limes. I can’t quite be sure which but, either way, it’s not a part that should have been left in. Not with that taste.

Perhaps if you’re used to a dry, somewhat bitter indian pickle, this product would be at least palatable but I do not find it pleasant in the slightest and I doubt many of you will either.

The one place where this sauce surpassed my expectations was in its strength, somehow managing the bottom end of what I’d call a

with what I thought were relatively mild chillies.

It’s neither the flavour nor the heat that it claims to be and most certainly isn’t something that I’d recommend.

And, unfortunately, this isn’t the only sauce I bought with that base.

The “chillies” in this one include both serenades and bird’s eyes but actually don’t taste much different or provide any real increase in strength. It’s still a

and, while it does have a little more sugar with that golden syrup, it doesn’t exactly taste sweet.

It’s a decent enough blend of serenade and generic smoke flavours but it’s not the rich, molassesy flavour that I expect from a barbecue sauce. Or any less bitter than the last.

Yet a barbecuse sauce is what it’s intended to be. The red grill pictured against its yellow label makes that ever so clear.

This one does a far better job of getting its intent across than today’s first item but does that really matter when it doesn’t manage to be that type of sauce?

It’s just as far from what it’s meant to be and just as bad as their “sriracha”. Only, this time, it’s even more of a trap, since the product type is actually on the bottle.

Their one saving grace is how cheap and tacky they look, making them likely to put off anyone not already acquainted with the company.

I enjoy neither of today’s sauces and have no idea how I would use them if I were forced to. I can think of no good application for either of them.

For better items, not knowing how to use a product might be an excuse to ask your opinion. To request a little more reader interaction.

For these, though, it’s just another excuse for me to say “stay away”. Do not buy these sauces unless you really enjoy bitterness.

2 thoughts on “Smoke and Sriracha”