So we’re a over a week into the new year now and it’s time to say goodbye to our holiday specials but, before we do, how about another drink or two to celebrate the fact that we’re still going?

These sparkling beverages are a little something special from my trip to Edible Ornamentals’ chilli farm at the end of last year. A topic that I’ll be coming back to soon enough.

For now, though, It’s these Nix and Kix drinks that we’re looking at. A brand named for their lack of any artificial ingredients and their little cayenne kick.

It has been said that cayennes are the healthiest of peppers, causing microscopic muscle spasms that keep the body active and help stave off an assortment of degenerative diseases.

I have no idea how true that actually is but I can say that all peppers are chock full of vitamin C and that the heart-rate increase chillies cause does, in fact, act as some sort of cardiac workout.

Yet, despite all those health benefits potentially fitting in wonderfully with the self-conscious marketing of today’s items, that’s not the reason that they have heat.

These drinks have no added sugar, no caffeine and no alcohol but they still want to give you a little bit of a happy buzz. An uplifting sensation from your body’s own endorphins, released in response to the chilli that they contain.

A healthier way to give them more than just flavour. To make them as sophisticated as they look in their tall, sleek cans, clad in cream and black. An almost matt design that lets its plain metal shine through in places for highlighting. They certainly look well made.

And, for once, the generic chilli image that advertises their signature ingredient is actually a proper representation of the variety inside.

It’s likely little more than coincidence but that iconic shape – The one that most people think of when you say “chilli” – is definitely a cayenne or cayenne-like strain.

But I’ve gone on about the theory for long enough. It’s time to put it all to the test. And to try out that flavour at the same time. 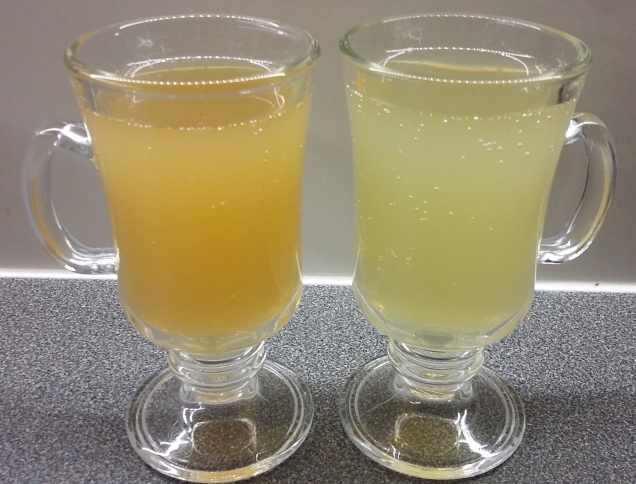 Being unsweetened, there’s a definite sharpness to the both of them, stemming from the carbonation. One that, for me at least, means I really have to concentrate to separate out the sensation of their mild chilli tingle.

I do find that the cool mint in the Cucumber Mint variety makes the burn stand out a little more but, even then, neither of them strikes me as more than a

And it is worth noting that they’re not as fizzy as most sugar-heavy sodas, either. The company are clearly aware that not everyone enjoys the tang of fully sparkling water. Thank god.

Of the pair, I would say that the Peach Vanilla is my favourite, containing

Its scent is slightly sweet and strongly vanilla, with just a hint of the peach coming through underneath. Yet, while it’s still quite vanilla-heavy upfront in the mouth, the flavours are far more balanced than the aroma, with the peach coming to the fore not long after and the sweetness lost to the fizz.

I can’t quite call it “smooth” due to that CO2 sharpness, but it’s not far off and it’s definitely not your average artificial flavouring.

The vanilla, especially, stands out to me as the real sort. Something that’s gone from being “generic, unflavoured ice cream” in my mind to a taste I really love, as the world of artisan foods has opened my eyes to what it should really be.

But just because I prefer that one doesn’t mean that there’s anything wrong with the Cucumber Mint.

It’s a lot more balanced on the nose, with even its hints of lime and apple coming through beside the two named flavours.

Yet I don’t really taste the apple in my mouth. The lime is there for refreshment but the main flavours are definitely the two cooling ones on the can.

It comes together nicely into something almost mojito-like but, for someone used to much stronger sensations in his diet, I find myself wishing that it had both more of the cooling properties and more chilli, to really emphasise the confusing combination of false temperatures.

That, to me, is where mixing mint and chilli really shines and it was what I was hoping for in this particular flavour.

But here’s the thing: These drinks were not made with me in mind. They were clearly made for a more normal sample of the population. For people who may not even have a particular interest in chilli, let alone my abnormal tolerance.

Those people will get a lot more out of their endorphin-releasing properties and they may well get to experience more of what I wanted from the mint version as well.

For chilli lovers like me, I expect that you’ll get a tiny bit more kick out of the Mango Ginger version but even it won’t be more than maybe a low 2 tingle at the absolute most. And, unfortunately, I don’t have any to show you. It’s the most popular flavour and was the quickest to sell out.

These aren’t really about any serious heat but they do taste good and they do have a small amount of chilli to do what they say.

I’d recommend them more to those after a healthier fizzy pop alternative than to major chilli lovers but, if you appreciate quality flavours and don’t mind them being on the slightly sharper side, you may well still appreciate these.

They’re unsweetened, low calorie and vegan, with no artificial ingredients.

They do contain a small amount of chilli extract but, whatever extraction process they’ve used, it doesn’t involve any concentration or anything not found in nature. They don’t have that awful, overcooked and chemical bitterness in the slightest.

In my line of work, “all natural” tends to mean extract free, not artificial ingredient free, but these two products are very much the latter. And that definitely comes through in their quality.

They’re not the spicy fizz that I wanted them to be, yet I like them all the same.

2 thoughts on “A Toast to my Third Year!”