Today it’s time for another weekend bonus recipe. A recipe that uses a little something I recently picked up from Dorset Chilli Shop.

Their Chilpōctli – A full flavoured chipotle extract that I’d highly recommend but that’s also so similar in heat and usage to Grim Reaper Foods’ milder extracts that it hardly warrants a full post.

item that, when used sparingly, adds a wonderful, rich, savoury, multi-layered chipotle taste to just about anything. Perfect for con carnes but also today’s dessert.

Because that’s what I’m using it for. Chocolate cake.

Or, more specifically, Dorset Chilli Shop’s own Naga Chocolate Bomb, minus any trace of naga.

Red chillies like those may be excellently suited to pairing with chocolate but I still feel like they missed a trick with not using chipotle. Its rich, dark, earthy, smoky flavour fits equally well, if not even more so, with the sweeter, smoother richness of chocolate.

As mentioned in one of my first recipes.

For this particular recipe, in addition to our chipotle extract, we will also need: 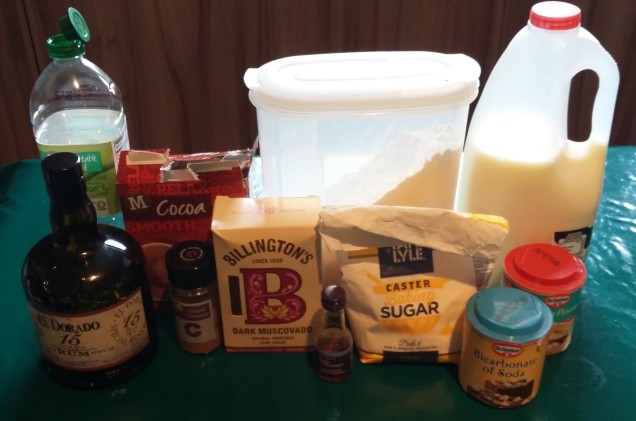 And a pinch of salt.

To start with, grease a medium-sized cake tin and preheat your oven to 180°c. Then, measure out 25g of your cocoa for the batter.

Mix it with all the dry ingredients apart from the dark sugar – We’ll be using that for what the original writers call this cake’s “topping” – and set the results aside for a moment.

We need to blend together the majority of our liquids before we can add them in.

To do so, whisk a whole pipette (roughly 15 drops) of the chipotle extract into your oil and forcibly combine the dark amber result with your milk and vanilla.

You’ll then need to beat that into your dry ingredients pretty quickly to avoid any separation but that doesn’t mean you can’t continue doing so until you have a nice, smooth batter.

Transfer the batter to your greased tin (remembering to lick the bowl – it’s delicious and egg free) and sprinkle over the dark sugar and your remaining cocoa.

Finally, drizzle over your rum and 175ml of boiling water before putting it in the over for half an hour.

They call this a topping but, in reality, the molten, saucy underneath of the “chocolate bomb” comes from the liquid thickening up as the cake rises through it. It’s on the bottom once your pud is done.

And, as for my rum choice, I was given it by a friend for this very purpose and they have expensive tastes. A 15 year aged, top quality sort like El Dorado is serious overkill for cooking.

Whatever rum you choose to use should be good enough for you to drink but not so good that it would be a shame for you not to. Much of its subtlety will be lost beneath the chocolate, anyway.

A decent but simple sort will do just fine, lending its dark tones to the already rich and sticky sauce of this glorious, molten dessert.

But it did come out the oven a little less liquid than I expected. 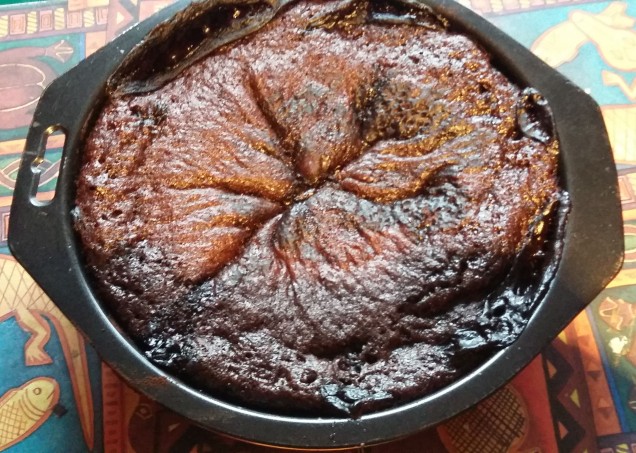 Not so much runny, like in the centre of Dorset Chilli Farm’s, but gooey and fudgy, instead. A change likely caused by my wider cake tin. 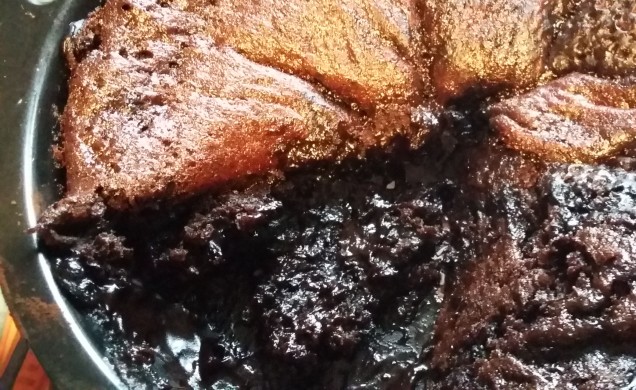 Yet, while it didn’t quite go as intended, it was, if anything, even more decadent. The perfect mix of cake and brownie, with earthy chipotle undertones and hints of the rum’s molasses.

It’s easily one of the best things I’ve ever baked.

But, while I did use a fair bit of my extract, it wasn’t killer hot. It was a slow burn, rising only to the very bottom of what I’d call a

in the back of the mouth and throat. Cooling as it wormed its way down to my stomach but still just a little bit warming all the way.

This is a cold weather treat, for all those upcoming winter nights. I’m really glad I discovered this recipe when I did.

Thanks, Dorset Chilli Shop, you’ve truly made some magic with this one!

But, before I go, It would be rude not to link the original recipe from Dorset Chilli Shop.

And it’s also worth noting that theirs isn’t the only chipotle extract out there. Only the best pure one that I’ve found.

This recipe will work with others and may, in fact, even benefit from the added orange in Grim Reaper Foods’ Sepulchre. But that’s an experiment for another day.