Hey folks, last month we looked at a delicious new product that I got at Reading Chilli Festival but this month I have something even newer for you.

This week’s product comes to you from Burning Desire Foods, is a little more out there than a sauce and was actually released on the day of the event. What I have for you is their chipotle syrup: 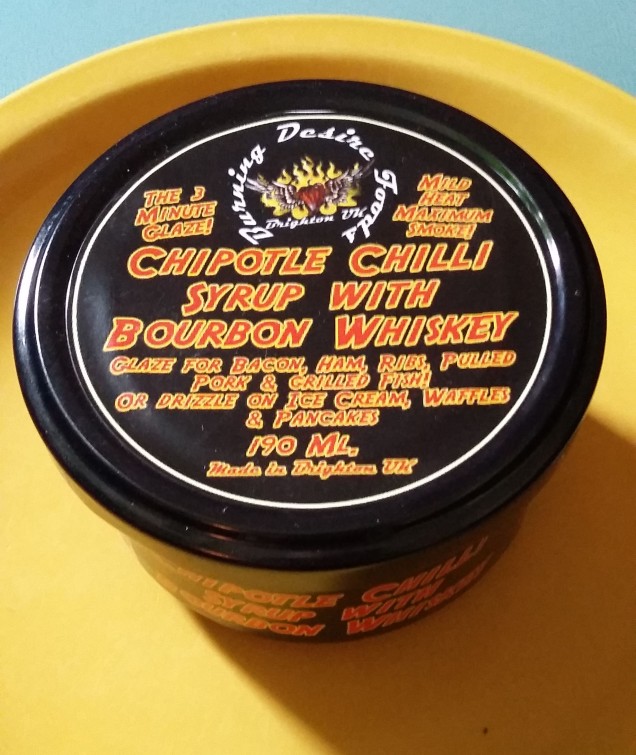 The packaging is a rather simple jar, black-labelled in some places to reflect the darkness of the product within but mostly just clear to show it.

On these black labels, however, there is some serious colour. Not in the form of imagery, mind you, but in the simple yellow-bordered red of the product name and description. A two-tone, fiery colour combination that really makes itself known amidst the solid black packaging.

In this text we can read about the syrup’s bourbon content, its mild heat, its smoky flavour, its applications and even its intended cooking time. Burning Desire have really gone all out with the information dump but there’s still one way we can find out more. 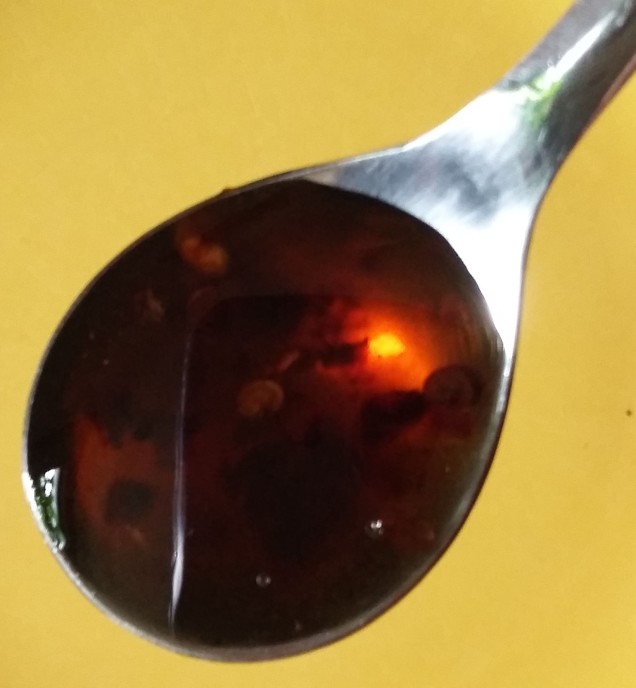 On the spoon you can see that this is, indeed, a syrup. A dark one, filled with the seeds of the chillies they have used. But they’re mild chillies and they’re in sugar. The fire that I get from them is nothing more than a late

It is, as they have said, a mild product. But not in flavour.

In its flavour, this syrup is rich, strong, dark and earthy, with a good bit of smoke to it and all the sweetness you’d expect of maple syrup.

Because that’s what it is. The suggested uses on the jar dance around it, calling this product an ideal bacon, ham or pork glaze and mentioning its use on pancakes and icecream, but there’s absolutely no denying the reality of the matter.

This is a maple syrup substitute.

Where the difference lies is that maple is woody, as you might expect with it being tree sap. This, however, is earthy, instead, and has some rather obvious smoky undertones that are going to make it even more perfect for meats.

It’s mild but absolutely full of flavour and such a novel use of chipotle. Green chipotle, if I had to guess, because I’m not getting even the slightest hint of fruity red jalapeño to interfere with the rest of its taste.

No, I’m actually picking up a little nuttiness from the pecan wood with which green chipotle is traditionally smoked.

This is one for the bacon lovers and dessert cravers among you for sure but it’s worth mentioning that there is another version. A vanilla version.

Just as the vanilla in the Chilli Alchemist’s latest lent it some wonderful smoothness of flavour, so too did it a wonderful, not quite creamy element to this syrup that would have made it even better on sweet stuff.

Unfortunately, though, it was a choice between that and the bourbon content when I made my purchase.

The bourbon content bridges the gap in flavour between the dark, molassesy notes from the sugar and the more savoury, smoky, earthiness of the chilli and helps this product come together as one delicious flavour combination, rather than two separate parts.

I loved the vanilla addition but it just wasn’t the same without the alcohol.