Hey everyone, this week it’s recipe week and I’d like to talk to you about one of my favourite curries.

The humble korma, however, doesn’t have the best of reputations, being considered both too mild and too desert-like to be called a “proper curry” by many.

It’s the sweet, rich, creamy, coconut-heavy and utterly chilli free dish used to introduce people to the spices of indian cuisine but, in my opinion, it’s a little more than that.

Made well, the almond, coconut and dairy base of this dish gives it the unique, rich, mild and milky flavour you might expect, ideal to be built upon with other things, such as its often quite complex spice palette. In fact, it’s a perfect carrier for these spices because, as with chilli, their flavours are mostly oil based, allowing them to be absorbed into the milk fats quite easily to spread throughout the meal.

But, depending on where you look, you’ll see many variations on the korma, some of which have rather different ideas on what flavours should permeate its thick, underlying sauce.

First off, we have the english restaurant version. Both almonds and coconut are quite region specific when it comes to indian kormas but they seem to be standard fare over here. And there is, of course, a rather more game-changing addition that’s seen a little less often: raisins. These add a deeper, darker and fruitier richness than the other ingredients but also push the dish towards more of an overly sweet peshwari feel that I’m not fond of.

Then we have the navratan korma from north india, using a wide selection of fresh vegetables to represent the nine treasures of an old emperor.

Or azerbaijan’s sabzi korma, which is named for its use of persian-style green herbs to reflect the cultural origins of the dish.

But the idea that I’m most interested in today comes from the hyderabad region, where they supposedly don’t just serve the hotter korma that I’ve always dreamed of but actually use their green chillies for flavour as part of a wedding celebration take on the curry.

And yet, I find that the taste of fresh chillies doesn’t spread nearly as well throughout a korma as that of a powder.

The deep, red flavour of a heaped tablespoon of ghost pepper powder will completely change a dish like this but today, we’re going for something milder. Something inspired in equal parts by the darker side of dried fruit like raisins and the appearance of Nao Sadatsuka’s curry in the Food Wars anime’s 21st episode.

Yet my game changing ingredient isn’t nearly as horrifying as hers. In fact, it’s the same red chipotle powder I used for cupcakes last summer. 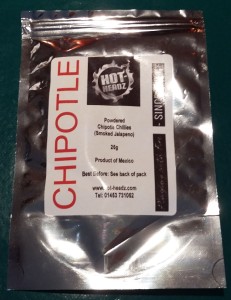 The idea here being that, while its red chilli notes and strong, dark, smoky flavour are at complete odds with such a pale and mild flavoured dish, they do still complement its richness and hint of cloves, while bringing the sweetness down just a little.

Plus, if we toast the almonds ahead of time (or just buy pre-toasted), then the whole meal takes on a delicious, roasted flavour that combines nuts, spices and a nice hint, as it ends up being, of smoked chilli. All with a rather throaty chilli tickle that sits at the bottom of what I’d call a

But there are a few other ways to do this. For example, if you’re just wanting a normal korma, without the chipotle, you’ll want to use blanched almonds and reduce the number of cloves to three, perhaps also leaving out just a little of the pepper and cinnamon. Here, however, they all support that roasted, toasted and slightly smoked flavour.

And, while I can’t say I approve of reducing the depth of its spice palette, a basic version can be made with just turmeric, nutmeg and a few spoons of garam massala for the spices.

Or let’s say you want to go the other way and really up you game. Saffron is a common enough addition, if you can afford it, and you couldn’t go wrong by adding some black cardamom and ceylon cinnamon.

Plus, jaggery would be a more traditional substitute for palm sugar. Or you could use brown sugar or honey for a similar flavour if you don’t have access to those.

There are many things you can do with this recipe but here’s what I did.

After skinning, deboning and roughly cubing my chicken breast, I heated up some vegetable oil (though traditionally this would be ghee) on a medium flame to fry it for about ten minutes and get it nice and brown. Then I set it aside for the next part.

This consisted of grinding all the spices finely, blending the garlic, ginger and nuts into a thick paste with 50 millilitres of water and chopping the onions ready to fry.

Then, since I still had a pan full of oil and chicken fat, I could get straight into that frying.

It took only about 5 minutes to start softening up the onions, at which point everything but the cream, coconut and chilli powder went in with them for another five minutes of thorough coating.

Going down to a low heat, I little by little added the cream to the thick, yellow mixture in my pan, bringing it a bit closer to its desired saucy consistency and allowing me to stir the chipotle through without any clinging to the bottom and burning.

Next I added my coconut milk, using the top half of a tin for the most coconut cream and least coconut water I could manage.

Then, to finish off, I simmered in the cubes of chicken for the last ten minutes, covering my pan for the first five of those to stop too much of the liquid from evaporating off.

And, after checking that the meat had cooked through, my dinner was ready to serve. A delicious, toasty, golden and creamy curry with a quite noticeable dry heat from its smoked chilli content:

I hope your future kormas work as well as mine.