Hello again heat eaters, today I intend to bring you a couple of things from Cowley’s Fine Foods but, for starters, let’s just look at their mild and flavourful Sweet Potato and Jalapeño Jerky.

It’s an interesting combination of flavours that isn’t clarified at all by its packaging.

The clear packaging shows off the sweet potato strips within and, to either side of the main image, we can see the makers in their historical dress. Suzie picking fruit for her basket and Martin with an old fashioned rifle, emphasizing their separate roles in the company.

Both work with jerky but, while he does the traditional meat, she makes the fruit leathers and, while I honestly have no idea, I like to imagine that the two come together for a product like this.

Between them is where the imagery truly reflects the contents, yet here things get a little confusing. Having made the sweet potato immediately obvious through their clear packaging, the white label focuses only on the jalapeño peppers but, while the green variety is most prominent, we also see the riper red and even a more obscure yellow variety in behind.

Each of these would provide their jerky with a completely different flavour so, as I crack the pack open, I don’t know whether to expect a medley of all three or what.

My question is soon answered, however, by a close inspection that shows up little green lumps on the side of the sweet potato sticks. These are made with the more well known green form of the chilli and, by the taste of it, those chillies have been pickled in brine.

Add that to the soy sauce used to give them some savoury umami notes and, sadly, the jerky pieces become just a little too salty for my tastes.

But perhaps that’s just me. Their salty green chilli does provide an interesting level of contrast to the sweet vegetable base and it does lend them a nice sharp little

across the sides and middle of my tongue.

They are mild but they’re the top end of what I would call such, with a definitely noticeable bit of burn.

They’re not badly made and they’re certainly edible but I, at least, would have preferred red chillies. After all, I’m sure we’re all aware of how well the fermented red jalapeños in sriracha go with sweet potato by now.

I don’t find this jerky anything special and was actually rather more fond of the heatless Texan Barbecue variety they sent me. All the same sweet potato flavour and texture but with smoke instead of the green and salty chilli.

But perhaps, before I finish off this post, I should take a look at their mushroom version too. A similar recipe but with a change of base and with clear flakes of red chilli alongside the specks of green. 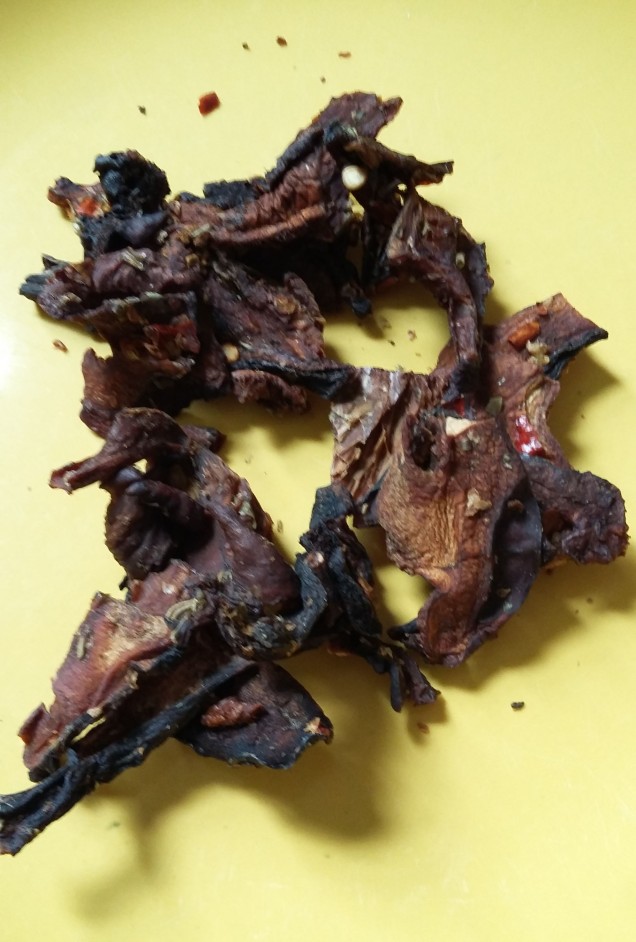 There’s still no sign of that yellow jalapeño variety but hey, at least we’re getting closer to matching the packaging. And, speaking of that packaging: 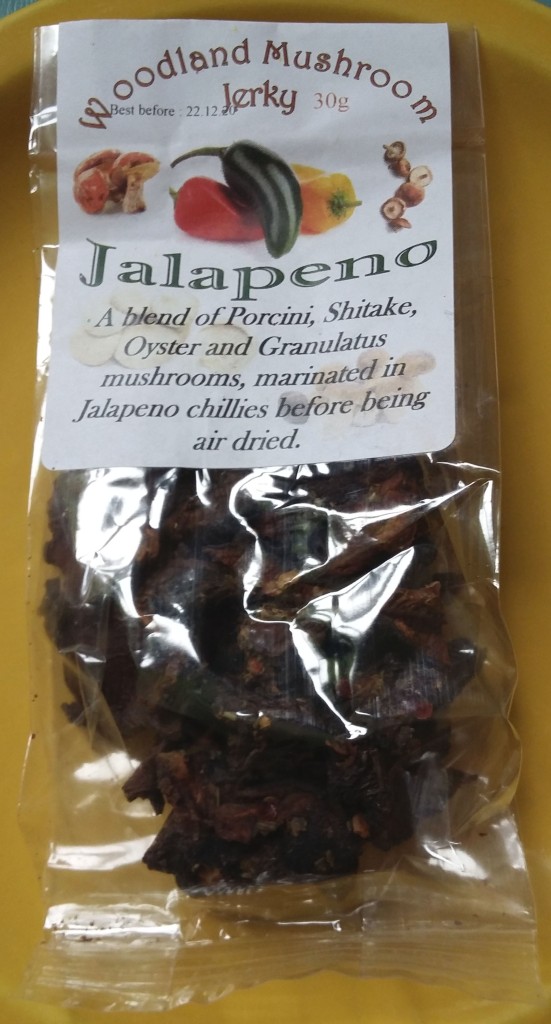 It’s mostly the same as the last but there is one major change.

Where the owners once stood, we now see two of the four types of mushroom that make up the product. Specifically the shītake and granulatus, though porcini and oyster mushrooms have also been used and can be faintly seen behind the blurb at the bottom.

It’s a good variety of mushroom types and, while I can’t say I know my fungi well enough to pick each one out, I can certainly detect subtle differences in the sweetness and deep earthy flavour of the various dried pieces.

Yet, while the differences are there, they all have the same rich, soy-enhanced umami taste to them and they are all at least a little bit earthy.

They all also have a bit of a bite to them, both from the chillies and the vinegar or brine used to preserve them. The heat is a little variable, though, with some pieces being shaped a good deal better to hold the flakes than others.

At their hottest, they reach the low end of my scale’s

but, on the whole, they rarely exceed the one and a half that their sweet potato counterparts packed and a piece or two didn’t even quite make that.

In terms of heat, I generally prefer certainty but the flavour of these mushrooms comes together very well. Far better that of the sweet potato.

I normally love sweet potato and expected to here as well but, as it turns out, I’m already halfway through this bag of mushrooms and thinking about how I might rehydrate them for use in cooking. Perhaps in soup or risotto.

Not that I expect they’ll get that far.

I was a little disappointed by their sweet potato variety but I would definitely recommend Cowley’s fine Jalapeño Mushroom Jerky. It was delicious.