Greetings everyone and welcome to the first of my Daddy Cool’s reviews.

Today we have the hottest of the sauces I chose from him, the medium heat Fatalii Attraction. 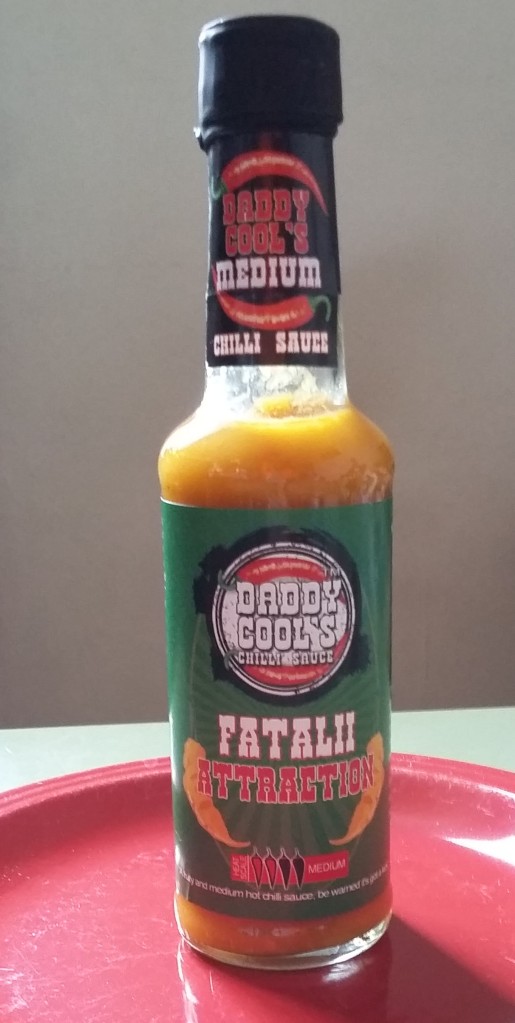 Its punny name taking centre stage beneath the equally red and white company logo, both of which stand out impressively against the green body of the label.

A green that in turn contrasts well with the orangey-yellow colour of the sauce inside.

In the middle of this label, behind the text, lies a faint oval of action lines, like the ones we saw from Wiltshire Chilli Farm, but, unlike them, Daddy Cool doesn’t commit to having them spread across the whole front of the bottle and I feel like they’re just a little too faint to have the desired impact.

What I do like, though, are the yellow chillies at its edges, recognisably fatalii and curling inward to close the name in. They mark the edges of the art without being blunt or unfriendly about it and they tell us what to expect from the contents.

It’s a similar design to his logo, in which the company name is seen in dark-bordered white capitals, encircled by two chillies of a more typical red variety and all within another circle of white.

While, on the neck of the bottle we find another, still very similar logo, where the company name is in red and it’s the medium heat of this sauce that’s in white to stand out against the black sticker and shrink wrap.

Personally, I feel like the label could be better and I have no idea why the main logo is covered in little black flecks but, at the same time, it’s attention grabbing, it tells us most of what we need to know about the sauce, it contrasts well with the contents and it definitely pulls its weight in ensuring brand recognition. So, regardless of whether or not I like the look of it, it’s pretty obvious that it does its job well.

But, as I’ve said before, the label means nothing if the product can’t live up to it. Has Daddy Cool actually managed to produce a fatalii flavoured sauce without the chilli’s usual intense heat?

There’s only one way to find out:

Before we even try it, we can see that this is a thick and pulpy sauce, owing largely to its mango and pear base, but it still flows just fine from the bottle. It has some scary reddy-orange flecks that didn’t show up in my photo but they’re actually carrot, added for its vegetable sweetness, not peppers.

No, the only peppers in here are the yellow fatalii themselves, making up a mere 3% of this sauce. Which begs the question: Can we taste them?

Interestingly, I’m not entirely able to answer that question.

The mango and pear give this sauce a smooth fruitiness, while the white wine vinegar gives it tang and lemon juice turns that tang to citrus. Onions and carrots add a hint of vegetable like you might expect of a pepper fresh from the plant, which is supported by the unusual savoury addition of lightly smoke garlic. Then, finally, mustard and turmeric round out the flavour into something that’s honestly very reminiscent of the chilli itself.

So much so that I can’t tell whether the fatalii is giving flavour to this sauce or if it just tastes like fatalii anyway. All I can say for sure is that it gives a significant heat, despite its low content, that I would say strikes a little above medium. The high end of my scale’s

and the low end of what I would call “hot”.

Yet I can see why he’s called this one medium. Compared to the chillies that go into Daddy Cool’s “hot” products, the fatalii is nothing.

But still, it’s a middle of the tongue burn that comes in fiercely after a short delay. It’s nothing insane, or even at the top end of what you’d expect from habanero or scotch bonnet, but it dies down much slower than it builds and leaves a great mouth and throat warmth.

If you like it hot but not super, this heat won’t disappoint you but your friends who like things just a touch milder might enjoy it too.

More importantly, though, it’s a wonderful, smooth, tropical flavour that is usable as a savoury sauce despite its high fruit content. It definitely brings the unique, smooth citrus flavour of the fatalii to a more accessible sauce, regardless of how much is actually the chilli, and it clearly shows off the company’s caribbean side with its mango and hint of mustard.

It’s a great product that will work as your mustard sauce for ham or toasted cheese or your mango sauce for chicken, while also having all the citrus needed to pair well with white fish.

There is, however, one more suggestion that its maker makes. Mixing it with mayonnaise for use as a dip.

Something about the added creaminess from

the emulsion we talked about last month

really brings out the best in this beauty and, in my opinion, it works as more than just a dip.

Yes, you can dip your tortilla chips, regular chips or even sweet potato fries into the mix but it would also make an amazing chicken or egg mayo and I’m quite partial to some fruitiness in my potato salads.

Perhaps the Fatalii Attraction would even work with soft cheeses or pilau rice.

In the end, it’s not as strongly mustard as many caribbean style sauces or as sweet and fruity as most mango ones but all its ingredients come together beautifully to make a rather different and multi-purpose product that I’d highly recommend.

14 thoughts on “A True Tongue Tantaliser”