Hey guys, today we have another company to look at. The lovely one man organisation that is Daddy Cool’s.

Steve Cooley, the owner of the business, started out like many others, just making hot sauce for personal use and for fun down in Derbyshire. Then word started to spread, his hobby became a business and now he tells me that he’s struggling to keep up with demand.

Apparently he even had to put the new recipe for the sauce I was most interested in on hold to maintain production of the better known items in his lineup.

But worry not, he still has plenty of cool products to share with you and that lineup includes a whole range of unusually fruity superhot sauces. What I requested he send me, however, are some slightly milder ones. 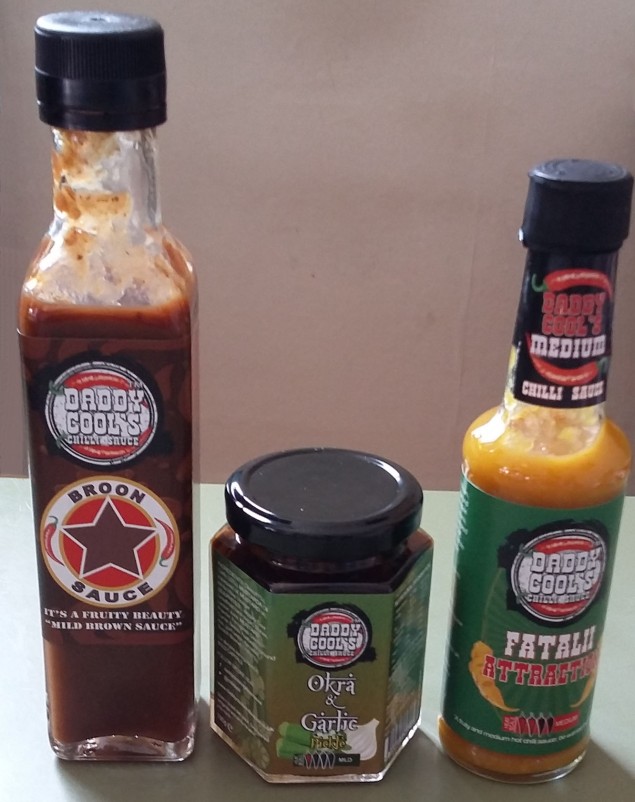 His famous Fatalii Attraction is the clear star of the show here, being based on a very hot chilli but also having some serious mango and pear content. Not to mention a touch of mustard that makes his wife’s caribbean influence quite clear. Knowing how hot the Fatalii is, I’m curious as to just how much of its flavour he can force into a sauce without surpassing that medium rating.

Yet the other two are still a highly exciting display of his variety.

The Fatalii Attraction may show off the caribbean heritage in his family but his very own british background is definitely on display with “Broon”, his mild chipotle take on the classic that is brown sauce.

And the third item shows neither of these influences. Instead, it’s an indian-style pickle made with a good deal of okra and garlic.

I didn’t feel like going for any extreme sauces this time, what with how hot many of my other upcoming samples are likely to be, but, hot or not, we still get to see the full scope of fruity flavours and different cultural styles that make Daddy Cool’s so popular.

All three of these sound like excellent items and I’m looking forward to trying the lot as they make their way into my ever-growing list of things to review.