Before we jump right into the recipe, however, I’d like to give you the opportunity to read up on the backstory to this dish and pick which of my three versions you’d prefer from my overview here.

This particular version is my vegetarian one as, despite its tofu content, most recipes for this dish don’t actual cater to the vegetarian diet. Most restaurants will insist on using ground pork but, as one particular place in London (sorry I don’t recall the name) proved to me, it’s not really necessary. Properly made Mapo Tofu gets its strong, meaty flavour from its signature fermented bean paste more than any actual meat.

So, in honour of that one restaurant and for the benefit of all you vegetarians out there, here’s my take on a meat free Mapo Tofu.

an equivalent volume of ginger

1 tablespoon of szechuan peppercorns (available from most chinese supermarkets)

6 good sized dried chillies (more on these in a moment)

And, not in the picture:

But, before we can start cooking, you’re going to have to press the moisture out of the tofu so that it can soak up the flavour of the dish. I find that the easiest way to do this is to wrap it between sheets of kitchen roll, three top and three bottom, then place it between a pair of plates or chopping boards with something heavy on top like so:

The kitchen roll should then be changed once it has soaked through, roughly twenty to thirty minutes after you begin pressing, but your silken tofu should be ready to be chopped within the hour.

And, rather than just sitting around, why not use some of that free time to cook up your very own chilli oil? Premade ones will, of course, do the job just fine but, with all the bell peppers I’ve given this version of my recipe for texture, I’d like to use a few special peppers too.

So, while you could easily use six “dried long” chillies for this dish, the readily available kind that most chinese restaurants seem to favour, I’m going to be using something a little more special. I’m going to be splitting it fifty fifty between the dried longs and those “facing heaven” chillies you saw in the ingredients picture.

But “facing heaven” isn’t their actual name. Facing heaven is just a group name for any chinese chillies that grow pointing upwards. These might have a proper name in chinese but, over here, they’re nothing more than “facing heaven rounds” or “facing heaven bullets”. Just don’t mistake the tiny facing heaven seven stars for them or you’ll be in for a shock!

You see, both chillies are fairly hot but the seven star has little in the way of body to contain that heat, while the far larger “rounds” spread it out more and have a whole pepper’s worth of flavour to go with it.

A rich, dry, somewhat woody or nutty flavour to compliment their dryish heat and papery, thin texture. The taste they give this dish is very much the sort you’d associate with quickly wok fried chinese chillies, not that of a more western pepper. And they compliment the saltiness of this version’s extra bean paste greatly.

So that’s why I’m using the “rounds” but how am I using them?

Well, we start by taking 8 tablespoons of the vegetable oil, increased slightly from my basic recipe to account for the greater volume of chillies. Then we heat this as gently as possible in a wok or small frying pan with the 3 dried long chillies, shredded so that they’ll work their way into our finished meal more pleasantly.

Next, as the oil’s colour is starting to change, we shred in the “rounds” as well. The smell as they hit the oil is divine but, so long as you only heat them for a short while, their toasted flavour will be even better. The only problem is, they burn rather too easily due to their thin skin.

I put mine in at the start and, while the oil I made was still usable, the slight bitterness that replaced the flavour of the burnt chillies certainly didn’t do the dish any favours. Please be careful if you use them and don’t make the same mistake I did.

Don’t let the chillies darken too much and remove your cooking conduit from the heat briefly if it looks like the oil is ever getting too hot.

Once you’re satisfied with its infusion, remove your oil from the heat entirely and set it aside for later use. It isn’t needed right away but the longer it sits cooling the deeper its colour and flavour will be when we do. It will continue infusing a bit as it cools to room temperature.

And, while it does so, we can get on with cooking the rest of the meal. Though it’ll help if we take a few minutes to prep everything before we begin. Certain parts of this recipe can be quite hectic otherwise. 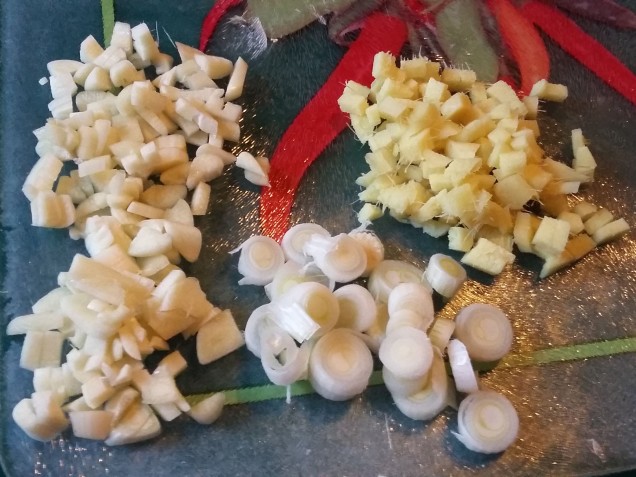 The ginger should be skinned and chopped, the garlic crushed and chopped and the spring onions sliced into rings. Your tofu aught to be in cubes and your stock should be warm and ready. If, like me, you’re using frozen bell peppers, you’ll want to make sure that they’re defrosted at this point as well.

When you’re sure you’ve got everything ready, add your remaining eight tablespoons of oil to a wok and begin to heat it on low, just like before. As the oils is warming up, crush your szechuan peppercorns between your fingers, breaking them up just enough to release their unique, floral, woody and just a little metallic smell.

This way of crushing them is a lot less effective than something like a pepper grinder or pestle and mortar but less effective is actually what we want here. We want them broken only enough to flavour the oil, since any more means we lose most of their curious spicy and mildly anaesthetic properties.

This way they hit the mouth in small bursts, instead of getting lost in the body of the dish, and, while they do add to their own little bit of heat, they’ll also numb your tongue slightly as the meal wears on, reducing the heat to slightly more manageable levels and keeping you from becoming too overwhelmed by the intense flavour.

It is my understanding that the people of szechuan use these peppercorns not for their own spice but as a way to be able to handle higher heats and enjoy more of the chilli taste.

But this isn’t the hottest version of my Mapo Tofu and, while it is a hot dish, it isn’t anything crazy. Assuming you like a nice hot meal, our szechuan peppercorns are in here as much for the unique taste that matches their smell as for any of their other properties.

And, once you’ve heated them for for two or three minutes, we can up the heat of our stove a tad to quickly fry in the ginger and garlic on medium. It takes just a quick swirl of the wok to mix them in and then we add the peppers on high.

Next, while the peppers may hold a little more water than the meat in my other versions, the contents of your wok is still going to be a little on the dry side right now so it’s time to stir in the bean paste and then add most of the stock, reserving just enough to mix with the cornflour.

Once you’ve made that cornflour mixture, make sure the contents of your wok are simmering away nicely and stir it in.

Keep everything bubbling for a bit and, once your meal’s begun to thicken, it’s time to swirl in the chilli oil you made earlier, pepper pieces and all.

And, with that done, we have a nice sauce for the tofu to soak up. Gently toss them in the wok with a spatula and, after about five minutes, we can finally add the whites of our spring onions.

All that’s then left is to cook them ’til the turn translucent and you have yourself a meal, warm and ready to eat. 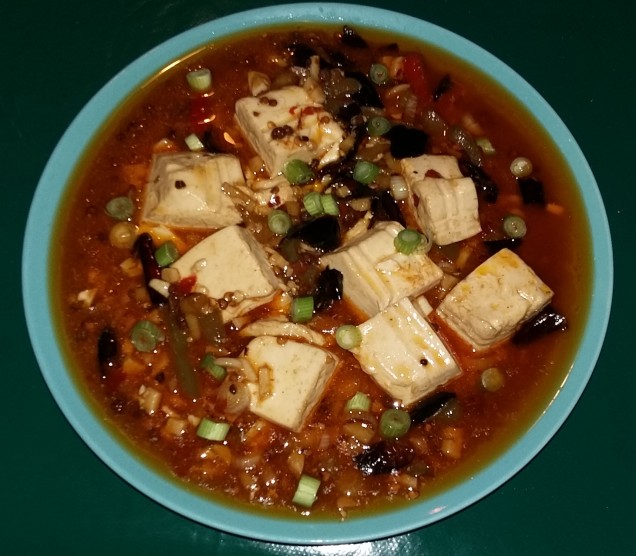 It can, however, be reheated later if it needs to and, with this recipe making enough for two, that’s certainly a possibility. Not everyone is lucky enough to share their meals with someone who likes a similar heat and this one is quite hot, reaching roughly a

If you’ve infused the oil just right, though it will drop of slightly as the meal progresses.

And, before you tuck in, I have a couple small recommendation to make.

The first is rice, often used to bulk out a hot meal, or just add substance but also great here because, with such intense, meaty flavour, this dish really does need a bland companion to keep it in check.

Or, for my second recommendation, the other possible counterbalance: The greens of those spring onions we used earlier. They’re intensely planty and vegetable in flavour, too much so for my tastes normally, but they help take the edge off what can otherwise be an overwhelming meat-like taste that you’re probably not used to.

Realistically though, for the best eating experience, I’d strongly recommend both.