Hello again spice lovers, today we’re looking at the Melliculus range’s hottest and the first product I ever tried from The Chilli Alchemist; The Melliculus Reaper:

Black and red, the Reaper is the most sinister looking of the bunch and clearly the hottest of the three colour coded ones.

In addition, the faint alchemical symbols seem to gather behind that word, their slightly lighter shade forming something of a spotlight on the name. The name of the product and the name of the chilli, the carolina reaper.

Because this particular popping candy does, in fact, get its heat from the world’s hottest chilli, making the “very hot” rating beneath that name something of an understatement, I’m sure.

It is, though, the only one of the range to have a rating even that high. The superhot black version we looked at last month was merely rated “hot”, despite its only flavourings being 7-pot/7-pod and ghost chillies.

And, if that doesn’t clue you in to the heat level I’m expecting, maybe its colour will. It’s darker and more powder filled even than the Aji version and, unlike that one, there’s no added ingredients like szechuan pepper. What you see here is all chilli. All reaper. 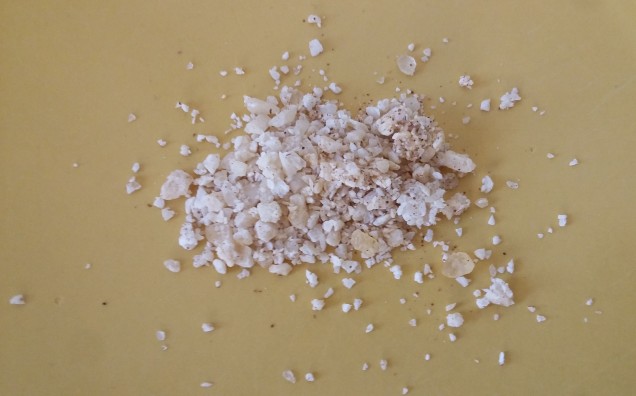 I make no secret of the fact that I love the mellower chilli flavour of the carolina reaper, neither acidic and fruity like the trinidad scorpion nor quite as bold as the ghost but rather a surprisingly light and gentle flavour for its heat level.

It’s often described as having cinnamon or chocolate notes to it and, while I don’t entirely agree that it actually tastes of those things, I can certainly see where those people are coming from. It does have the same sort of spiced elements to it as you might get using cinnamon, cocoa or nutmeg.

It’s a wonderful tasting pepper that is rendered sadly inaccessible to most people by its insane heat but there is one problem with its flavour, even for those like me who can handle the burn. It’s strangely sour.

That sourness occasionally comes through just a touch in this popping candy but only when you get a particularly hot clump. For the most part, the sugar content counteracts it perfectly, making this one of the best ways to experience the taste of the chilli. Especially with how well the undertones of cocoa butter support it.

The Melliculus Reaper is an excellent chilli product and was, prior to sampling the Melliculus Aji, my undoubted favourite of the range. Now, it’s hard to say which of the two I prefer but I would recommend them to quite different audiences.

The Aji one was hot and tasty, with a very interesting and unusual blend of flavours. It’s perfect for those who like hot and want something a little different without going to extreme heats. Or to show those who aren’t familiar with the breadth of flavour found in the chilli world just how different some peppers can taste.

The Reaper, however, is not for the faint of heart. It is a gorgeous tasting product for the connoisseurs who can see and taste past its extreme firepower or a particularly interesting and unusual way to challenge your mates to try the world’s hottest.

It is not for the casual hot food lover.

Heat-wise, it’s a little delayed, building as the candy begins to pop and quickly becoming a fearsome fire in the back of the throat and at the roof of the mouth.

Like the other Melliculus popping candies, the heat goes upwards far more than it would with other products from the same chilli but, unlike the others, this one reaches a whopping

It’s not perfectly consistent, mind you. Some small mouthfuls are just a touch lower due to the way the chilli is distributed but, for the most part, that’s the heat you’ll be getting.

And, of course, seven point five is a long way from ten, the heat of a first ingredient carolina reaper sauce, but it’s also just as far from five, the heat of a ghost one. Compared to most supermarket chilli products, this is completely and utterly off the scale so please, do be careful if you’re not used to extreme heats.

It’s a wonderful product but one to use with caution and, while I’d generally just eat it as is, I could certainly see it pairing well with vanilla and white chocolate ice-creams or pressed into icing atop a raspberry sponge cake.

One thought on “Snap, Crackle and Burn!”