Today’s recipe, however, is a little less sweet than our last, being less of a snack or desert and more of a full on meal. What we’re going to be making this week is a scotch bonnet and sweet potato stew.

What you’re going to need for this is: 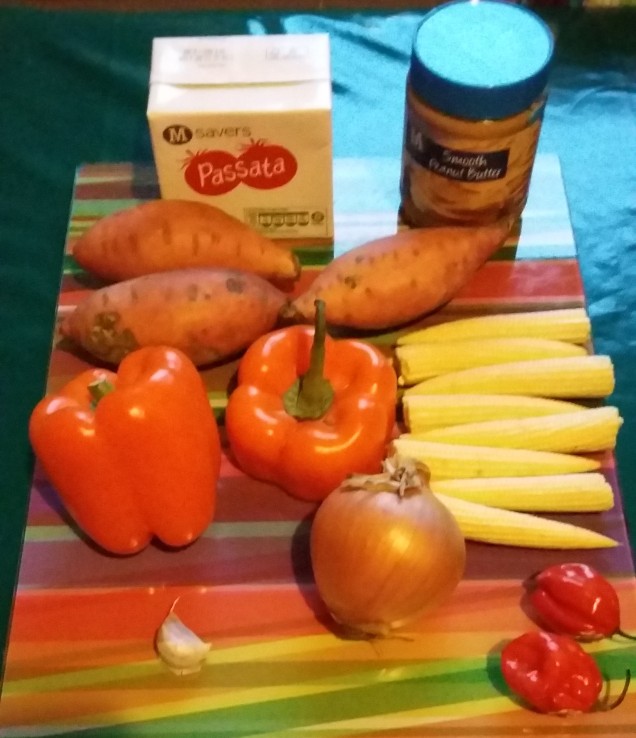 But before we get into the actual cooking, it’ll help a lot if you chop everything in advance. Except, you know, the liquids.

Personally, I like to take the seeds out of my scotch bonnets, since the heat is in the placenta that attaches them anyway and I’d rather not get them in my teeth. It’s a not an important step, though. As long the chillies are well shredded, it’s your choice what you do with the seeds. You could even try and grow them.

As for the rest, the garlic should be crushed and diced just as small, the corn cut to half inch (that’s a little over a centimetre) segments and the sweet potato just a little bit bigger than that. For the onions and bell pepper, just be sensible. As long as you de-core the bell, it’s hard to mess them up.

Then we fry the onions and garlic in our oil in a large saucepan, stirring over a low heat to avoid burning them.

Once the onions have gone soft and slightly transparent, we can add the chilli, giving us something like this:

This picture may help you see what your onions should look like but, to be perfectly honest with you, I’m just including it because I found it strangely pretty. I know, I’m weird.

After just a few minutes of cooking in your scotch bonnets, it’s time to move on to the next ingredient. Or should I say ingredients?

All the other vegetables go in at this point to get coated with the chilli and onion. This helps make sure the heat is evenly distributed when we add the liquid. Which is, of course, the next step.

After all your veg has had a good five minutes to infuse, add the passata and stock, whacking the heat way up to bring them to the boil.

When everything’s mixed together and bubbling away nicely, put a lid on your pan to stop the contents from drying out. We can now drop the heat right down again and our stew will continue to boil for the remaining twenty minutes it needs to soften up the sweet potatoes and finish cooking.

Finally, once that’s all done, we can turn the heat off completely and mix two tablespoons of peanut butter with an equivalent amount of our stew’s liquid, before stirring the result back in.

You might be wondering why I’d recommend such a thing, as the stew will already be quite thick but the spread isn’t for thickness. I’m recommending it for the richness it lends to the finished dish. In fact, since it’s being used for flavour and not for texture, you can even add a little water to the pan if you’re struggling to get liquid to blend with the peanut butter.

It does not make the dish taste like peanuts in any way but it does round out the wonderful warming flavour it already has, making it an integral part of this scotch bonnet and sweet potato stew.

Although, while its flavour is definitely warming, many of you might consider its upper

to be rather more than that word implies.

Should the highest point between medium and hot prove too much chilli for you, however, this dish can easily be made with only one of the scotch bonnets for roughly half the strength. You will lose a lot of the chilli’s much loved flavour in the process but this stew has plenty of its own to make up for it.

Regardless of how hot you choose to make it, though, the dish looks just as beautiful as it tastes once sitting on the dinner table: