Happy thursday everyone, it’s the first of december so, with present buying season well underway, I think it’s about time we went over this year’s best products. 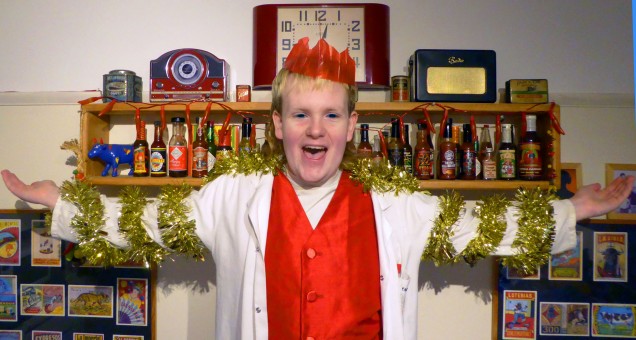 Of course, technically speaking, this year’s recap will only be covering seven months but that’s still seven months worth of great stuff from which to find the perfect present for any chilli lover in your life. And, if you don’t want to bother looking at all my summaries of what would and wouldn’t make a great present, you can always skip to the end where I list the absolute best. Here goes:

Back in May, when my blog first began, we saw Grim Reaper Food’s Hellraiser Milk Chocolate and Mad Dog brand Reaper Sriracha, as well as Hollywood Cocktails’ ginger based Dark and Stormy Jam.

The first of these is my personal favourite of its range and the mid heat thereof, with a milder white “Purgatory” version available for those less into chilli and a hotter dark “Black Widow” bar for those who’d rather have a bit of a challenge. Every single one of the Grim Reaper’s chilli chocolate bars is flavoured with an assortment of spices and oils to give them more than just heat and they are packaged beautifully and even tied with a ribbon. An excellent choice for those with a bit of a sweet tooth.

More on the extreme side, the Reaper Sriracha is also very well packaged but will make more of a display piece for a collector or serve as a great all purpose sauce for those who love the seriously hot sauces.

The ginger jam, while a touch less pretty, is my favourite product of its kind and, while maybe not what a chilli enthusiast wants, is what I will personally be giving to my less spice-loving friends and relatives. I hope they don’t read this.

And, to cap the month off, I showed you all a recipe made with Lily’s Chillies’ mild Smoked chilli jelly. Sadly, this product is no longer in production but, should you find it anywhere, it would be a very different and memorable present for those who prefer smoke to fire.

Moving on to June, the month of my birth, I had a sample box from The Chilli Pepper Company. They specialise in rare and interesting seeds but what they wanted me to try was their sauce. Specifically Hell… Unleashed. They did, however, also send me their caribbean style Dragons Breath and superhot Ball Breaker ones.

Hell… Unleashed itself was something I would never recommend anyone else eat but, should you know someone with a major dangerous chilli collection, it would be a spectacular show piece.

And, as for the other two, Dragons Breath was a medium level sauce perfect for any mustard fans, while the Ball Breaker, being designed specifically for a reviewer, is more for the real connoisseurs or those who obsess over YouTube videos.

But there was one other company I dealt with that month. A small one called La Picanteria who import an assortment of proper mexican dried chillies. If you want something rare and exciting for someone who fancies themselves a bit of a chef, they’re well worth checking out. They even had one type I’d never heard of.

If, however, mexican hot peppers aren’t going to cut it, July saw me order from South Devon Chilli Farm. I wasn’t particularly happy with their hotter padrons but I can assure you that their other products are what they say they are and that they have an excellent array of dried chillies to suit all heat tolerances.

My other two reviews that month were of Hot Diggidy Dog’s Hot Pepper Sauce and Flying Goose brand Sriracha Mayo.

The first was good but fairly generic. Gift-wise, its only claim to fame is that you can get a small, stocking filler bottle of it like you can of Tabasco but it’s a good deal hotter.

The second is again, not the giftiest of things, in my opinion, but combines all the joys of garlic and mayonnaise into something even vegans can enjoy. If you know someone who’s recently cut out animal products, a chilli mayo like this that they can still eat may well be a very welcome surprise.

August gave us a real surprise find in the form of Zukāli’s Chipotle Kafé Salsa but, sadly, it’s not a product we’ve seen much of in the UK. The two things that month that you can get for christmas are Mr Vikkis Banana Habanero Pickle and CaJohn’s Hydra sauce.

Of these, the first is a condiment for the indian food lover and the second is a powerful sauce made from a rather unusual chilli. The artwork on the Hydra sauce is wonderfully done and its name and choice of pepper make it a perfect present for any Marvel, chilli or greek mythology geek who can take it super hot.

The first of these is very much for the dangerous collector or the lover of hot sauce history but may also bring back memories for the older generation of extreme heat eaters. Regardless, it is not for the faint of heart and, while I haven’t had much chance to highlight them yet, there are sauces nowadays that have the same heat and much better flavour. In fact, Dave’s Gourmet’s Ghost Pepper Insanity or his all natural Trinidad Scorpion Sauce both do the job a lot better than his original. It is purely a product of its time now.

On completely the opposite end of the spectrum, this one of Tabasco’s sauces is an extremely mild barbecue one but again, it’s audience is fairly niche. If you know someone who loves the brand, this and their chocolate will make really shocking but actually rather enjoyable gifts. Aside from that, I recommend it only for those who love to experience weird food combinations because, while it does work quite well, the thought of putting cola in a sauce is a novel one.

And the Hardcore Jalapeño, what can I say? This is for the chef who wants the chilli fresh but struggles to get hold of it. Similar purées are also available for the Chocolate Habanero and the very hot and lemony Fatalii.

The one other thing from this month worth noting is that the South Devon Chilli Farm do pre-orders of seedlings. My relatives ordered six of them for me and I was very pleased with what I got. For the budding gardener, that gift is perfect, even if they don’t actually get anything but an order confirmation until March.

Then, in October, we saw ChimouliS and The Chilli Alchemist steal the spotlight, the former bringing a very liquid Scotch Bonnet Sauce to the table, while the latter gave us the Smoke Potion: Magnum Opus.

The Alchemist’s Magnum Opus is a glorious barbecue sauce for those who like it hot and, like all their sauces, comes in either the regular bottle seen in my review or a wax sealed and hand-labelled alchemical vial. Both look great but the vial really does take the theming to the next level.

For your average challenge seeker, ChimouliS’ Scotch Bonnet Sauce is a dare that they and their friends will have hours of fun with but it’s also actually a very good sauce. It can be used sensibly so those who appreciate the scotch bonnet will enjoy it even if they are not the daring sort.

We then saw more from ChimouliS this last month in the form of their Pear and Lemongrass sauce and their Pineapple Ghost Chilli one, as well as the Harry Spooksville Jam from Thousand Hills Ltd.

This pumpkin jam felt more on theme for autumn than for winter and its regular packaging leaves a little to be desired so it doesn’t feel like the best of christmas gifts, despite tasting absolutely gorgeous.

Both of ChimouliS’ offerings that month, however, were wonderful sauces with a very traditional feel to their labelling. The first was a sweet and fruity one with a medium heat, great for those who like it fruity, while the second was a very different sauce of the usual ghost pepper level, making it more for the superhot food eater who wants to branch out.

The entire ChimouliS line, including these, is available in small “wedding favour” bottles which would be perfect to use as stocking fillers or for compiling a taster selection like the one they sent me. I will be showing you more from them soon, including their famous Salted Caramel spread so keep your eyes open for them aswell.

In addition, over October and November, we saw the first two of The Chilli Alchemist’s Melliculus Popping Candy range, the Tropicus and the Aji. The first of these was a low medium heat with a wonderful tropical fruit and scotch bonnet flavour, while the second was more citrusy and peppery with a hot but not crazy heat.

Popping candy has always been an exciting concept for children and young teens and the chilli brings a whole new dimension to it, while nostalgia might well make these a good gift for those who grew up when popping candy was first on the shelves.

But there are also two heats above the ones I have reviewed thus far, meaning that you can cater to the more daring with ghost pepper or reaper versions should you so wish.

And so, from all the products we’ve seen this year, it’s time for

–The Chilli Alchemist’s sauces for the mad scientists, collectors and anyone with a sense of style.

-Mad Dog brand Reaper Sriracha, as an all purpose sauce for those who like it crazy hot.

–The FBI’s Ball Breaker by The Chilli Pepper Company for its superb heat and fruity flavour.

–Grim Reaper Foods’ Hellraiser Milk Chocolate because I am one of those chocoholics and I really appreciate the touch of spices alongside the heat.

–The Chilli Alchemist’s Melliculus Aji Popping Candy for its unique flavour and sensation.

-Zukāli’s Chipotle Kafé Salsa for its beautiful dark, smoky, roasted taste that I can share with my family.

–Hot Diggidy Dog’s Mini Bottles for those who like their sauce restaurant level hot.