Hello everyone and welcome to my first review of november.

This week was all set to be business as usual with another of my product samples from The Chilli Alchemist but, just a few days ago, my new twitter PR guy came up with something different. Something halloween themed. Something that looked a lot like this: 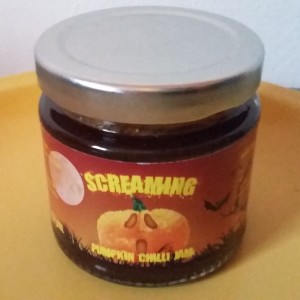 In fact, that’s exactly what it was. Thousand Hills’ Screaming Pumpkin Chilli Jam.

The label on this one is backed by a gorgeous sunset gradient, fading from deep red at the top and sides to a muted orangey yellow in the middle behind the main jam’s logo. That is, of course, the screaming pumpkin. A large orange fruit with the face from The Scream cut out of it. But, despite looking a lot like one, said fruit is not a pumpkin.

No, proper inspection reveals that it is, in fact, an orange brain strain chilli. A rather uncommon breed from the 7-pot line, who’s chillies are reportedly named for their ability to heat a whopping seven pots of stew.

They are, however, also known as 7-pods and nobody knows for sure which is the true name. What we do know, though, is that they originated from trinidad and have produced some of the hottest strains on the planet, including the primo that I reviewed some time ago.

The source of the brain strain name, on the other hand, is very well documented and it comes simply from the shape of the pepper. Its breeder took one look at it and thought “that looks like a melted brain”.

In terms of heat, this chilli is somewhere between a ghost pepper and the trinidad moruga scorpion, averaging over a million scoville but not even coming close to taking the world record. It’s not the hottest chilli in the world or even the hottest 7-pot but it’s still an extremely hot pepper.

And, while it’s clearly the focus of the packaging, it’s not the only image on there. The design has it framed between the moon on the left and a silhouette of bats emerging from a dead tree on the right, completing the halloween feel quite nicely.

Then we have the silhouette of grass at the bottom of the label, breaking up the edge and stopping it from ending as abruptly, as well as the name in blocky yellow all caps. They’ve tried to reduce this blockiness, like they did with the bottom edge, by adding a paint splatter effect to the text but it just doesn’t work for me. The design itself is really well done but the lettering seems too harsh against it and could use a it of a redesign in my opinion.

That is my only complaint about the packaging, though, and its something of a nitpick really. It’s an excellent piece of labelling.

So, now that we’re done looking at it, it’s time to try this product. 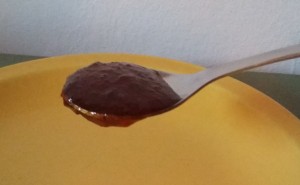 It’s thick and sticky with just a few small bits of seed and chilli. This is the sort of jam you can spread easily and, while it might take a moment to come off the spoon, it should dollop just as well.

Some people love finding large chunks of fruit in their jams and, I must confess, I can be one of them at times. At others, however, I find those chunks really get in the way of a nice, even coating. With this particular product, you’ll never have that problem.

As for the taste, it’s initially quite underwhelming. Sweet, sugary and a lot like cooked pumpkin but otherwise rather empty. No depth to it at all.

Give it a moment and that all changes. First the cinnamon makes itself known and then, as the heat kicks in, so too does the fruitiness of the chilli and a delicious undertone of caramelised apple. This jam is a wonderful, well rounded mix of fruit and spice perfect for halloween or thanksgiving. It just takes a second to get there.

But you’re probably wondering, how hot is this exactly? It’s an incredibly hot pepper but the high sugar content of a jam tends to cool things down a bit. In the end, though, it doesn’t do all that much because this jam still reaches a whopping

As mentioned above, it does have a short moment with little to no warmth but then it comes in hard and fast at the front of the mouth before climbing the roof to the back and eventually becoming a real throat fire.

It is one of the hottest jams I have ever tasted and so, while a good three and a half points away from rivalling the hottest all natural sauces, it should still be approached with caution. Most restaurants would call something half this jam’s heat “hot”.

But for the serious chilli lovers who enjoy things in excess of ghost pepper sauces, the taste of this jam is a thing of beauty. Sweet but not overwhelmingly so. Nice and fruity. Just the right amount of spices. A thoroughly enjoyable experience, even for someone like me who doesn’t normally appreciate pumpkin.

It would make a wonderful cheesecake using one of my earlier recipes and putting both ginger and cinnamon in the base. I could also see it livening up pumpkin or apple pies and finding a home as an ice cream topper, especially on cookie dough flavours.

But it’s not purely for sweet stuff, mind you. As with most chilli jams, it would make an excitingly different cheese on toast or work as a glaze for meat or tofu. In this particular instance, I’d recommend pork.

And why not try it with strips of grilled halloumi?

The only issue I see with this product is that they don’t make it easy to get more. The manufacturer name is hidden away in small print and Thousand Hills don’t even bother to tell you that they have a website. What’s worse, they don’t even sell a “Screaming Pumpkin Chilli Jam”. It seems that this was a special product just for this month’s Lick My Dip chilli subscription box.

The good news, however, is that they do sell a “Spine-Tingling Pumpkin Chilli Jam” named Harry Spooksville. It’s not as pretty but they assure me that it’s the exact same jam inside, making it well worth getting if you can handle the crazy heat.

4 thoughts on “The Spooksville Special”