Happy tuesday spice lovers and welcome back to my weekly reviews.

Today, we have another bargain find, this time actually from a UK producer.

When I bought it, I thought that this was going to be a sauce as the front says nothing to the contrary and the back was completely covered by a massive discount sticker. It turns out, however, that I was wrong. Let’s look at the ingredients list.

This is a chilli purée, a bottle of blended jalapeños preserved in synthetic vinegar. Nothing more, nothing less. And that’s exactly what it smells like. Just the same as those pickled jalapeño rings you get in supermarkets or on your pizza.

But, so we’re all clear, I should probably take a moment to explain what “acetic acid” is to those of you who are less familiar with it.

Acetic acid, or “synthetic vinegar” as I called it above, is the key part of vinegar. The thing that gives it its acidity and therefore both its preservative properties and its sharp taste. Something that has to be manufactured separately to or extracted from your standard vinegar.

It is used here because that sharp taste is the only flavour it has. It does the work without adding any of the other flavours you’d typically get with vinegar itself. Which is what you want in a “pure” chilli product like this one.

Before we delve any deeper into the flavour, though, let’s take a look at the 50ml bottle this purée came in.

The background to the whole thing is green to match the chilli inside but it’s not a pure green. It’s a recoloured wood grain texture, simultaneously bearing resemblance to grass and giving it a simple, strong undertone. Which is exactly what it wants to be to reflect the product inside.

It is, in the words of the makers “The chilli, the whole chilli and nothing but the chilli”. Or at least the blended chilli and very little else. Aside from a little preservative, this is just jalapeños in a bottle. It’s simple as can be and the background reflects that, while also highlighting the supposedly grassy taste of the chilli.

What else does the design have to it? Not a whole lot really. The Hot-Headz brand and the words “Roasted Jalapeno” in brown block capitals, the former encircled by the name of the Hardcore line.

The white fade around the stencilled branding looks good and the more solid outline around the chilli name makes it pop but that’s about it. Just text and background, keeping it simple like the contents.

And so the time has come to crack it open. 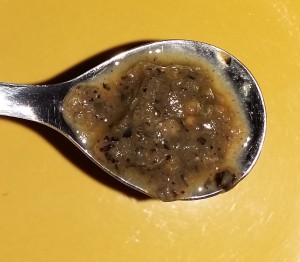 It’s thick and chunky, with something of a liquid element from the acetic acid. It’s also full of fibres, seeds and what look like pieces of coriander leaf. These are the chilli’s skin though so, despite the label calling it fresh and grassy, you won’t be getting quite same green leafiness to this you might get in some sauces.

In fact, it’s zingy. Really zingy! Jalapeños are tangy at the best of times but the acid really brings it out here. And what’s more, it’s hot. Not quite vindaloo hot, say, but it certainly has heat far in excess of what you might have been expecting.

Which lingers at the back of the mouth and leaves a definite warm glow in the throat, if not any actual burn.

You can definitely taste the chilli on route but it’s not the coriander and lime flavour of most sauces, it’s the pure, unadulterated taste of a chilli that isn’t actually quite as grassy as everyone thinks it is. A flavour more akin to those pickled rings or the green Tabasco than what we normally think of as jalapeño.

It is, however, very unrefined. This isn’t a sauce and isn’t really something to be eaten on its own. It’s an ingredient. A way to keep jalapeños chillies until you need them without changing the flavour too much in the process.

Yes, the chilli is noticeably cooked but it is far less so than if it were grilled or fried and it still retains a lot of its fresh taste.

But if a three out of ten scares you, don’t worry. The moment you put this on or in anything, the heat goes way down. It acts a lot more like a

unless you eat it straight, which I really wouldn’t recommend.

Ultimately, it’s more about flavour than the chilli kick anyway. Consider putting this in pasta salads and similar part-fresh dishes.