Hello and welcome back to another tuesday review.

Again, I offer something slightly different. This week we look at not one product but two. A comparison review of some of the best canned ginger beer on the market. 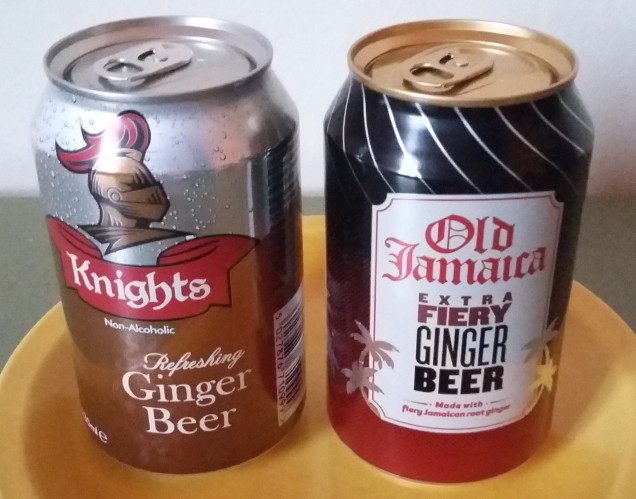 In the right corner, we have the market leader, Old Jamaica, known for being noticeably hotter than most supermarket varieties. But this isn’t your garden variety Old Jamaica.

No, while the roof of the can is still golden, the background colour has changed from its usual gold-highlighted pastel golden brown to a black and red dotted gradient design with silver highlights. The only other change is the one that tells us why. An “Extra Fiery” between the brand and the flavour.

The gradient design has, in fact, become a mainstay of the brand lately but, even with the red base now on their regular ginger beer, the black top instantly tells you this is a force to be reckoned with and their signature font is so ingrained in the minds of most ginger fans that they know what the drink is the moment they see it.

So what goes up against this powerhouse?

Knights. A completely unheard of brand with a very different take on its design. Rather than going tropical with palm trees and playing up caribbean origins, they opt for a more renaissance look, in keeping with their name.

The bold and sharp edged, yet smooth and arching lines of their logo look good and do a surprisingly good job of showcasing the juxtaposition between sharp and refreshing that makes a good ginger beer. Whether this is intentional or just a happy accident, I couldn’t say for I have searched and found nothing about the company so have no idea if they specialize in ginger beer or just make it on the side.

What I can say though, is that they have done a remarkable job of integrating this logo into the product if it’s not their signature one. The helmet’s brassy tones reflect the colours associated with ginger drinks and the silver behind it both makes the logo pop and symbolizes the fizz on top. A representation only furthered by the white bubbles printed all over it but never trespassing into the brown below.

These colours are then separated by the red cloth-like backing to the brand name, again in keeping with the heraldry theme which we see even more of when the silver makes a subtle appearance in the form of their crest.

This in turn rests behind the words “Refreshing Ginger Beer”.

Packaging-wise, Knights does a lot to show its identity as a ginger beer while Old Jamaica’s extra fiery focuses far more on how it differs from the rest of the Old Jamaica line. Both do their job well but Old Jamaica is only recognisably a ginger beer at a glance because of how well the brand is known.

The real battle, however, will come from within.

As you can immediately tell, the two are very different drinks. Old Jamaica Extra Fiery, like its regular cousin, is a golden ginger beer, signifying its reliance on extract of ginger root for flavour. This has always set it apart from the pale, white, watery own brand varieties supermarkets put out and it’s really done the company well.

Knights, on the other hand, while not nearly as translucent as those cheep and nasty stem ginger beers, looks very much like one in colour, with only the tiniest hint of cream in there.

Actually, it tastes a lot like a stem ginger beer at first too, coming in quite strong and sharp. This zing, however, quickly backs off as the initial hit from the fizz dies away, leaving you with a subtly rooty flavour that is, as the can says, refreshing. It’s also very smooth, almost resembling a cream soda. Definitely one of my favourite ginger beers.

Whereas old Jamaica, while still a tiny bit sharp at the start (most fizzy drinks have some small sharpness about them), doesn’t have any stem ginger elements to it at all. Instead it’s all golden root flavour, full bodied and warming. Even in its taste, the extra fiery version is just a tiny bit better than the original, feeling a little more fleshed out by the increased ginger content.

It is not the full flavour experience that I get from the Knights ginger beer but the one aspect it does well it does ever so well. In the flavour department, Old Jamaica Extra Fiery is a very close second.

But that’s not what it sells itself on now is it?

No, it’s the heat that people turn to this particular drink for and it delivers. Both in that almost nasal sense and in good old fashioned mouth burn. It comes in at the very bottom of what I would call a

Not massive by any means but a hell of a heat for a ginger beer, making it hotter than any canned drink since Molotov Energy.

And this is where Knights’ falls short. It reaches a still respectable

but does not outperform the standard Old Jamaica or any other big name brand besides Idris. It takes a big swig for me to get a good mouth heat from it and the nasal twang is pretty minimal between the initial sharpness and the golden comedown segments of its flavour.

It is a decent heat for a ginger beer but nothing special, hence why it is not my favourite but joint favourite with the Extra Fiery. Some days I want one and some days the other but both are excellent beverages.

If anyone knows where I can get more of the Knights, please do write in.

One thought on “A Ginger Beer Battle”