A couple weeks ago I came home from the island of Menorca where I spent two lovely weeks in the sand, sea and sun but found surprisingly little I could bring home to show you. They didn’t really do a lot of hot food on the island and what they had was almost all labelled “pimiento”, the Spanish for pepper.

These are Padrons, a type of chilli often nicknamed the Russian Roulette Pepper for their inconsistent heat. These peppers are available as a bag your own item or in 250g punnets (pictured above, slightly worse for the plane ride) from almost every supermarket or green grocer in Spain. They’re a lot less common back in the UK but some of the larger branches of big name supermarkets will sometimes get them in and they’re well worth the effort to track down.

Not that they’re anything special straight from the shop.

Raw, these peppers taste a bit like your average green supermarket chilli, only a little gentler and milder flavoured, with a long lingering taste somewhere between nuttiness and plantiness. They posses a tiny bitter tang, suggesting that they aren’t really ripe, which you can also see from the mass of pure white, underdeveloped seeds inside.

Combine this with thin walls that resemble curried okra in their almost rubbery texture and you’re probably wondering why anyone would like this chilli.

It’s because of how it tastes when cooked.

You see, the Spanish don’t eat this chilli raw, they don’t make sauces with it and, contrary to what you might have heard, they don’t seem to cook with it either. All they do is fry it in olive oil until it chars a little, then top it with salt. And the result looks a little like this: 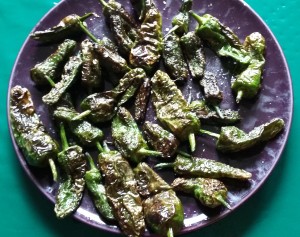 What was once more than a mouthful with some of the bigger specimens shrinks down to a shrivelled, bite-size appetizer. They don’t look so great like this to be honest but they sure do taste it.

Frying them breaks down the chlorophyll just a bit, taking the edge off the planty taste and removing that hint of bitterness, while letting them go a little black adds sweetness and further emphasizes the unique “nutty” aspect of their flavour.

What’s more, they go from being a little rubbery to being soft yet slightly crisp. Less crunchy than your average cooked pepper and far more pleasing a texture than the raw version. You can tell they’re the same plant but the experience is completely changed for the better.

I actually char them a little more than most because I find the sweet, caramelized outer skin contrasts terrifically with the salt and mild fresh green pepper taste. Just be careful not to burn them completely as they turn soapy and bitter then.

But how are they heat-wise? This is a point of debate and is highly variable depending on the grower.

Since Padrons are traditionally picked not just a little under-ripe like your average green chilli but before the seeds are even fully developed, much of their heat hasn’t come through yet. Your average Padron pepper does have heat but it has very little. So little I can’t detect it at all in most cases, an ultra-mild

But every so often, there is a hot one. Some say it’s insanely hot. Some say it’s about what I’d call a two on my scale. Some say only one in thirty are hot and some as many as one in six. Me, I say maybe five in a punnet tops have a slight warmth to them but I’ve never had one with an actual mouth tingle, let alone a good burn. I don’t know how hot these peppers actually get.

But the anticipation sure keeps things interesting.

And that would be that if it weren’t for the South Devon Chilli Farm’s well timed fresh chilli sale. Red and green, normal and super hot but, most importantly, Padrons. With a choice of heat.

Finally, the time had come for me to get a hot Padron and I was excited!

But when they arrived, something didn’t look quite right.

These ones are huge and far paler than they should be. With the two bumps at the base, they look to have at least some Padron or Shishito (a somewhat similar pepper) in them but, while they possess the colouration of the latter, neither normally comes this large.

I had to try them and was quite surprised by what I found inside. Half of them had the usual mass of seeds you’d expect from a Padron, all huddled up near the stem, but half looked more like this: 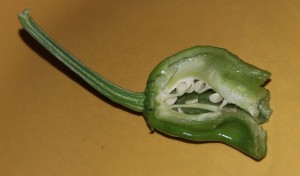 A smaller number of them, spread down the entire length of the pepper.

For those of you who don’t know what this means, the heat of any chilli is in its placenta, the white pith or core that holds in its seeds. If that’s all concentrated at the top, you’ll get a heat gradient where it grows as you work your way up. If it’s spread throughout, on the other hand, the heat will be roughly consistent regardless of which bit you eat.

They all had the same type of heat. A bullet chilli like one without the soapiness I find those have, hitting most at the front and sides of my mouth but still warming all the way down. The strength and placement, however, were entirely random.

Some were a mere tingle, only just worthy of a one on my scale, while others were strong enough that they could have made a three out of ten sauce. Some started out as one and turned into the other, some had a medium heat throughout. There was very little consistency but, eating them fried up like regular Padrons, I would say they topped out at around

In other words, even at their hottest, they’re not as hot as a fresh Habanero but they’re still hotter than the vast majority of Habanero sauces. Not to be trifled with if you’re not used to high heats.

Their heat and appearance aren’t the only oddities though. While the wall thickness of these chillies is the same as their mild cousins, their texture is not. They have a serious crunch to them raw, instead of that rubberiness in the Padrons I’m used to, and so remain somewhat tough even once charred. They are not the soft, easily wolfed down morsels I know.

And then, in terms of flavour, they maintain a mild green chilli aspect but trade “nuttiness” for slight herbal undertones which seem to all but vanish once cooked. Where there was before a tiny green bitterness in the raw pepper, now there is only a certain small sharpness to the placenta.

So they taste different, they feel different and they look different. So far as I can tell, the only similarity between these and the “Padrons” they were named after is the fact that they’re picked unripe. In raw appearance, they match South Devon Chilli Farm’s green Bhut Jolokias more than anything else but, while their inner flesh looks rather similar, their crunch is distinctly different. And their variable internal structure suggests that they’re a recent hybrid. Perhaps they are a half Ghost.

Whatever they are though, these have proven themselves to be nothing like the Padrons I love and, in the end, quite a disappointment. They do have more heat but they’ve lost a good deal of flavour to get it.

With the tough, chewy texture they possess, they don’t even stuff particularly well.

But please, do yourself a favour and try the regular version.