Today’s sauce was in the news a few months back for some quite unfortunate usage but it caught my attention for another reason. For years, the UK military have been getting mini bottles of Tabasco in their ration packs but, all of a sudden, things have changed. And soldiers are just throwing their new sauces away because they’re scared.

I couldn’t pass up an exciting reputation like that so I pulled a few strings and, low and behold, my contacts got me this. A genuine, army issue sauce bottle of Hot Diggidy Dog. Not that I couldn’t have bought the same thing from their website if I’d wanted to. 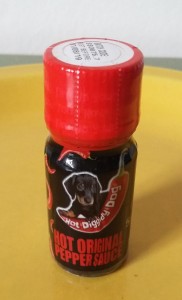 Their 5ml bottle definitely has that small and cute appearance to it, which I love, but not to quite the same degree as the mini bottles of their rival. You see, while both are smaller versions of their big bottle sauces, Tabasco retains its original shape while Hot Diggidy Dog opts for practicality with a bigger lid, roughly the same width as the bottle. It therefore loses just a touch of that big thing turned small appeal.

And, speaking of interestingly different packaging decisions, Hot Diggidy Dog has no label. Instead, all the branding and important information is on an extended heat shrink wrapping that covers all but the very bottom of the product. I understand Tabasco’s 5ml bottles are similarly wrapped but, unlike them, Hot Diggidy Dog does this for their entire line.

The wrapping in question is primarily black, thereby blending into the dark brown bottle within but not doing any favours for their logo. The red chilli that makes up half of it stands out just fine but Earl, the sauce’s supposed canine creator, is almost the same colour as the background, requiring a white outline for anything but his brown foot and muzzle to show up at all.

The block caps text and random arrangement of smaller chillies around the outside seem quite uninspired too but they do support the strong red and black colour-scheme, which we also see in the red lid covering.

So, all in all, the branding seems strong and consistent but far from anything special and it tells us next to nothing about what to expect from the sauce. So I crack the bottle open. 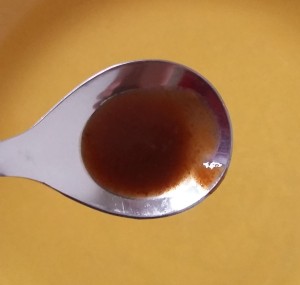 At first glance, the sauce looks almost as dark as its bottle and appears so thick as to warrant some serious bottle slapping. That couldn’t be further from the truth though as, despite being rather gloopy, this sauce pours at a quick and easy, yet still controllable rate. And, once in the light, it takes on a rich golden brown colour. Quite appetising, in fact.

And, as it leaves the bottle, the smell hits me. Rich, deep, vinegary and somewhat reminiscent of raisins, alongside the pepper you’d expect.

Initially this confuses me as white vinegar, sugar, cornflour and mustard should not produce such a scent. Or, indeed, flavour, as it tastes much like it smells. Further research, however, turns up a discrepancy. While this bottle states that the sauce contains “white vinegar”, another name for the distilled or spirit type, what it actually means is “white wine vinegar”, definitely explaining the grapiness I detected.

And there’s something I found when looking up the actual ingredients. This sauce uses bird’s eye chillies, making it unexpectedly hot. It clocks in at the top of my scale’s

and strikes me more in the upper back and sides of the mouth than anywhere in the throat. It’s not the kind of crazy heat you get it some specialist sauces but it’s definitely scraping the upper bounds of anything you’d expect to see in a supermarket.

It’s a pretty decent sauce, all things considered, if not quite as frightening as it was billed. It’s not anything particularly outstanding but the slightly mustardy pepper and dark grape flavour, along with its clear vinegar tang, is still far from disappointing. I would definitely spice up chinese cooking with a good blob of this.

Most of all though, remember Hot Diggidy Dog when it comes time for christmas shopping as it’s going to make a lovely stocking filler.

3 thoughts on “Small and Yappy”