Hello again everyone and welcome to my last post of the month. This tuesday I plan to cap it off with another foray into the unusual. I bring you this: 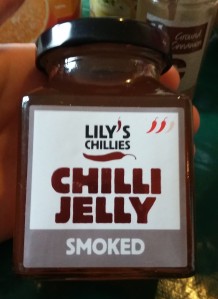 Lilly’s Chillies’ mild, Smoked chilli jelly. It has a golden flavour from its habanero base, similar to marmalade but without any of the sharpness, while also having a bit of smokey depth from some ultra-fine smoked pimiento powder. It looks light and clear but the smoke is definitely there, even if it isn’t overpowering. And in fact, that’s for the best, since it makes a lovely cheesecake this way.

Yep, forget doing a full review on this jam, I’m giving you a recipe this week. Here are the ingredients: 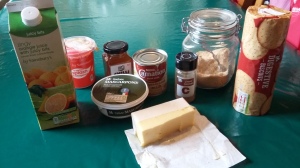 200ml Cream, double or thicker, do not use the single pictured

Start by crushing the digestives. Some people like to do this in a freezer bag, I prefer to do it in a bowl, as long as they’re well crushed it doesn’t really matter. When you think you’re done, jiggle the container and crush any larger chunks that come to the surface. Repeat as necessary.

Next, mix in your sugar and cinnamon before melting and adding the butter. The crumbs should now begin to clump, add more butter if they don’t, then transfer to a well lined cake tin and press together to form the base.

Use a springform tin for easy removal later. Trust me, it really helps.

If there a few small chunks at this point, don’t worry too much, just pop your base in the fridge to firm up while you make the middle.

For this bit, get a clean bowl (you wouldn’t want crumbs in the cheese) and mix your mascarpone, cream and condensed milk until they form a single entity. The soft, rich flavour of the condensed milk is the secret for making a sweet cheese layer to compliment almost any chilli.

Add just a dash of orange juice to further compliment the jam but not too much or it’ll cause trouble setting. If, like me, your house-mates refuse to drink smooth, pouring it through a tea strainer or sieve will remove any bits and keep your dessert from becoming grainy.

Take an electric whisk to the resulting mixture until it noticeably thickens, this could take a while but is vital to the consistency of the finished cheesecake. Then pour it onto your nicely cooled base and leave to set in the fridge again for at least three hours.

When you’re ready to eat it, take your tin out the fridge, remove the contents and spread with the jam. Feel free to warm it slightly to make this easier but try not to heat the cheesecake too much. 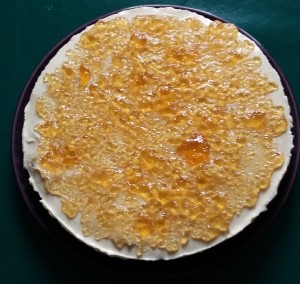 And now, all that’s left is to eat this deliciously sweet and creamy, yet smokey and ever so slightly spicy pudding. Enjoy!

I would call this jam’s heat a one and a half on my heat scale. More than just a little bit noticeable but still very mild. In this recipe, however, the milky cheese layer counteracts our heat a tad, bringing it down to a minor

And that’s roughly where it should be. Something for everyone to enjoy, even those who don’t regularly eat chilli. But say you want to kick it up a notch? What do you do?

You have two options to add heat to this dish.

The first is to combine the smoked jam with some finely sliced fresh habanero, removing the core to avoid unwanted seeds in your teeth and adding a few drops of liquid smoke (an american all-purpose smoke flavouring) to make sure that side of the flavour isn’t buried.

The second is to use a different jam.

While there are tonnes of chilli jams out there, only a few of them will work for a sweet recipe like this. Too many have something of a savoury taste. If any of you have specific recommendations, feel free to send them my way, otherwise, I’ll just stick to what I know works. The entire Lilly’s Chillies range.

Among other things, this includes a Mint chilli jelly of around the same heat, a tomato based one closer to a two and a half and a delicious Dorset Naga jam if you want your cheesecake super hot. I would rate this last one between a four and a five, depending on whether your particular mouthful contains the shredded ghost pepper relative strewn throughout their hottest preserve.

Of course, heat isn’t everything and, if you actually want a good tasting cheesecake, I’d like to make a few suggestions on how to adapt this recipe for other jams. While you will most likely want to keep them for smokey jams, not everything goes with orange and cinnamon.

For acidic chillies like the habanero and scorpion, leave out the cinnamon and replace 6 of the digestives with ginger biscuits but keep the orange.

For more fruity chillies like the ghost, dorset naga or scotch bonnet, swap the cinnamon and 6 of the digestives for the same number of ginger biscuits again, then replace the orange with lemon.

For green chillies, do the above but with lime as your fruit.

And for the gentle flavoured reaper, should you find such an insane jam, try 4 ginger biscuits alongside the cinnamon and use fruit zest instead of juice, your choice of which.

Most of all though, experiment and have fun finding your own best dangerous dessert recipies.

Until next time everyone, enjoy.